Captain Harbhajan Singh's decision to bowl first seemed to be spot on as Mumbai Indians bowled out defending champions Chennai Super Kings 112 in the opening match of the fifth edition of Indian Premier League. 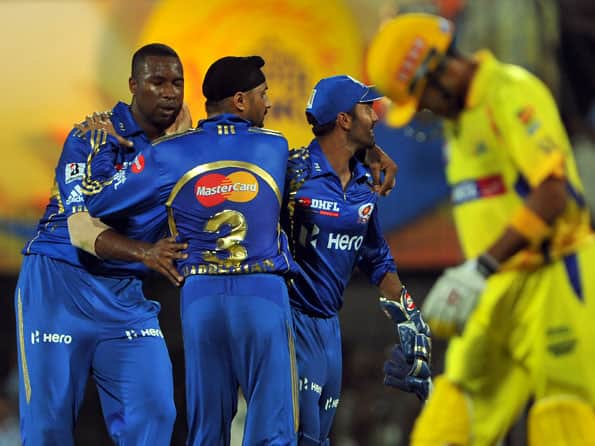 Captain Harbhajan Singh’s decision to bowl first seemed to be spot on as Mumbai Indians bowled out defending champions Chennai Super Kings 112 in the opening match of the fifth edition of Indian Premier League.

The newly-laid 22-yard strip which had some patches of grass on either side turned out to be a nightmare for strokeplayers as most of the home team batsmen failed to check their shots as they were shot out for 19.4 overs.

While MI bowlers stuck to their task, CSK batsmen helped their cause as three of them including skipper Mahendra Singh Dhoni were run-out. Lasith Malinga (2/16), Pragyan Ojha (2/17) and Kieron Pollard (2/15) all got vital breakthroughs.

Mumbai Indians got the breakthrough in the very first over when Faf du Plessis (3) failed to beat Ambati Rayudu’s direct throw after Murali Vijay tapped the ball to extra-cover for a quick single.

Vijay, who has had an indifferent first-class season was not in his element as he failed to clear the field. As he was getting bogged down, left-arm seamer James Franklin’s clever change of pace did the trick.

The Tamil Nadu opener couldn’t connect what has been a trademark flicked six over deep mid-wicket over the years.

Instead, rival skipper Harbhajan standing at the 30-yard circle gobbled of an easy catch. Vijay could muster only 10 runs off 17 balls.

Suresh Raina — one of the biggest star in this format started well. Raina effortlessly lifted pacer Abu Nechim Ahmed over long-off for a six. He also hit a couple of boundaries on his way to 36 before Ojha sent him back into the dug-out. (PTI)