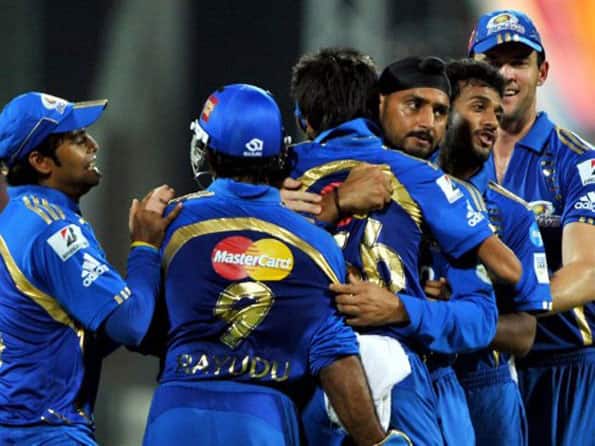 It was great achievement for the Mumbai based IPL franchise who missed the services of regular skipper Sachin Tendulkar.

Batting first on a track that got lower and slower with passage of time, Mumbai Indians managed 139 but that was challenging enough for the Men in ‘Red and Gold’ who were shot out for 108 in 19.2 overs.

The moment last man Raju Bhatkal was dismissed, it was celebration time with Tendulkar and team owner Nita Ambani rushed in to congratulate the team

The manner in which Tillekaratne Dilshan (27, 20 balls, 5×4) started with a blazing cover drive off Lasith Malinga, it looked like RCB will finish with a flurry.

Mumbai Indians captain Harbhajan Singh then played a masterstroke that suddenly turned the tide. He gave Malinga an extra over instead of the usual two he bowls in his first spell. Malinga yorked Dilshan with his very first delivery and the slide started from there.

Credit should be given to skipper Harbhajan (3/20 from 4 overs), Kieron Pollard (1/21 from 4 overs) and young leggie Yuzvendra Chahal (2/9 from 3 overs) for keeping things tight as well as picking wickets at regular intervals.

Law of averages caught up with Chris Gayle (5) although he got a debatable leg before decision off Harbhajan when he plonked his frontfoot way forward. A lot depended on Virat Kohli (11) but a cross-batted heave off Harbhajan brought about his downfall.

Almost all the RCB batsmen were guilty of misreading the nature of the pitch as they tried to hit everything out of sight offering simple catches.

Earlier, the Royal Challengers Bangalore restricted Mumbai Indians to a modest 139 on a difficult track.

Mumbai Indians captain Harbhajan Singh opted to make the first use of a difficult track where none of his top-order batsmen found stroke-making easy.

It was Vettori’s Black Caps teammate James Franklin who hit an useful 41 which gave the Mumbai Indians’ total a semblance of respectability.

What worked wonderfully for the RCB was Nannes’ opening spell. The tearaway quick bowler who has been erratic most of the times was spot on as he found the right length and also got some swing going in his favour. Nannes had wonderful figures of one for 14 to show for his efforts.

It was his scorching 148 kmph fuller delivery that saw Sarul Kanwar (13)’s stumps taking a walk after Aiden Blizzard (3) was run-out due to a horrible mix-up.

Ambati Rayudu (21) and Franklin added 41 runs for the third wicket in 5.1 overs — seadate by T20 standards before the former was holed out to Chris Gayle at extra cover trying to hoick the military medium stuff dished out by Raju Bhatkal.

Surya Kumar Yadav (24) looked fluent during his brief stay at the wicket as he hit Vettori for a six and four but RCB skipper showed smart reflexes as he ran the youngster backed up too far. Kieron Pollard, Rajagopal Sathish and Harbhajan Singh were all dismissed cheaply whcih put paid to the hopes posting a huge total.

Man of the Series: Lasith Malinga