Mumbai Indians’ Ishan Kishan waiting for his chance to shine

Mumbai Indians’ Ishan Kishan waiting for his chance to shine

Young Mumbai Indians batsman Ishan Kishan hopes to meet the high expectations his team has from him, having replaced veteran Yuvraj Singh in the previous game.

Young Mumbai Indians batsman Ishan Kishan hopes to meet the high expectations his team has from him, having replaced veteran Yuvraj Singh in the previous game.

“He’s such a big player and the fact that I am playing in his place raises expectations from others. Playing under such pressure will help me in the long term, said Kishan here ahead of Wednesday’s IPL match against Kings XI Punjab.

Kishan batted at number four in place of Yuvraj who had managed to tally 98 runs in the first four games. He was run out for 17 against Sunrisers Hyderabad on Saturday.

Asked whether he was now sure of his place, Kishan said, “We have so many good players in the team. All, including seniors, have to be on toes and my focus is that whenever I get opportunity I give my 100 per cent.

The Jharkhand player was candid in saying that although he would love to keep wickets too for MI instead of playing just as a pure batsman he knew that South African Quinton de Kock was MI’s first choice.

“Obviously, I would like to play as wicket-keeper-batsman but with de Kock in the team, I have to wait for my chance. I am keen to learn from him. I have been able to learn a lot by seeing his fitness level and dedication. He’s a very good player with good hand eye co-ordination with the bat, a thorough professional.”

Kishan disagreed with the notion that he had fallen behind in the race for the wicket keeper’s slot for India behind his deputy in the Under 19 World Cup, Rishabh Pant, who has already played in Tests and is in the running to make the squad for the upcoming World Cup.

“I don’t feel I have fallen behind. My focus is on improving my cricket.”

He also felt that fast bowler Alzarri Joseph, who was a member of the victorious West Indies team in the U19 World Cup in Bangladesh in which he also took part, has improved significantly as a bowler.

Joseph has been roped in by MI as replacement for the injured and unavailable Adam Milne of New Zealand and made a sensational debut with a record-breaking figures of 6-12 against SRH in Hyderabad.

“He did very well in the World Cup and helped the West Indies win it. He looks better than what he was in his under 19 days and has improved his line and length. He also reads the batsmen quite early. Because of his height he also gets extra bounce,” said Kishan. 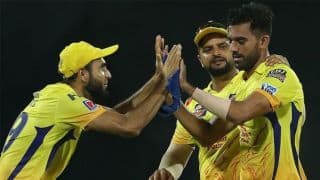 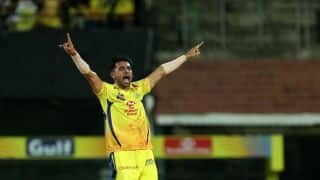