Mumbai Indians are 77 for three after nine overs.

In the Indian Premier League (IPL) 2014 match played between Mumbai Indians and Royal Challengers Bangalore at Mumbai, Mumbai made a fine start. Both Ben Duck and CM Gautam started well. However, Duck got out to Harshal Patel’s bowling. Once he lost his wicket Ambati Rayudu and Gautam took over essaying fine shots. Even when Yuzvendra Chahal the leg-spinner came into the attack, Gautam used his feet to loft him down the ground for a sumptuous boundary. Gautam followed it up by playing a debonair pull shot off Ashok Dinda. Dinda though, got the important wicket of Rayudu with an off-cutter. Rohit Sharma walked into bat at No 4 batting position. Actually, Bangalore didn’t help themselves by bowling extras.

Bangalore won the toss and elected to field. Mumbai suffered a big blow when Zaheer Khan, the experienced left-arm seamer was ruled out due to shoulder injury.  The track as expected is flat and should favour the batsmen throughout the game. Bangalore need to keep taking wickets at regular intervals to restrict the opposition.  In fact, Mitchell Starc and Aaron generated  a decent burst of pace for them. 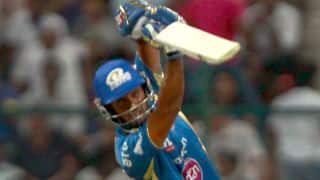 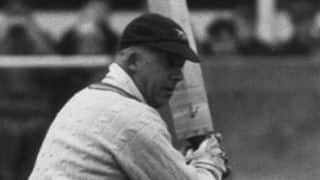