KKR are currently on top of this match.

After the Kolkata Knight Riders piled up a rather big total of 163 for five in the first innings, the Mumbai Indians have faltered in the first half of their chase, managing just 71 for the loss of two wickets at the end of the 12th over in this ongoing opening encounter of the Indian Premier League‘s (IPL) 2014 edition.

Opening the batting in the blue of MI for the first time, Michael Hussey didn’t look like his usual IPL self as he could manage just three off the 13 deliveries he faced before Sunil Narine castled him in the fifth over. R Vinay Kumar and Morne Morkel started the attack for the Knight Riders, and the latter bowled an inspired first spell as he conceded just two runs off his first two overs. He also clocked speeds of over 150 consistently. The pacers’ good work was duly followed by the spinners as Narine got the prized wicket of Hussey in his very first over.

Shakib Al Hasan too has bowled well, as he ended the brief cameo of Aditya Tare in the eighth over. With Piyush Chawla too coming into the attack, it will be interesting to see which bowlers the Mumbai batsmen target from here. Mumbai will be pinning all their hopes now on Ambati Rayudu and Rohit Sharma (the two men in the centre now), and also their crisis-men.

Tare was dismissed as he danced down the track to Shakib Al Hasan and got a top edge. The catch was taken by Shakib himself as he ran back and jugled with it before safely pouching it. 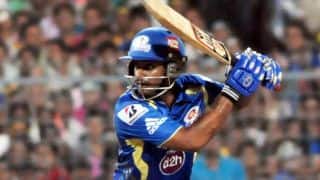