With Mahendra Singh Dhoni blasting his way, Mumbai Indians held their nerve and trumped the Chennai Super Kings by nine runs. In a game where the batsmen found it difficult to score, two men stood out to make it a memorable affair. 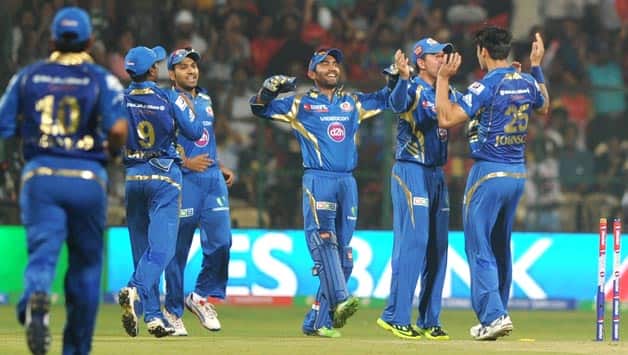 With Mahendra Singh Dhoni blasting his way, Mumbai Indians held their nerve and trumped the Chennai Super Kings by nine runs. In a game where the batsmen found it difficult to score, two men stood out to make it a memorable affair.

Kieron Pollard shot Mumbai to 148 when it looked like they would be bundled out, whereas Dhoni blasted his way as the other batsmen stuttered.

Mumbai captain Ricky Ponting won the toss and chose to bat first on a wicket that has a reputation of slowing down as the game progresses. As a result, Mumbai dropped the young Jasprit Bumrah and brought in the left-arm spinner, Pragyan Ojha. Dwayne Smith came in place of Jacob Oram. Dirk Nannes, Ben Laughlin and Ankit Rajpoot were the new faces in the Chennai line-up.

It was an innings that saw Mumbai stutter as they lost wickets at regular intervals. Their big guns — Ponting and Sachin Tendulkar fell early. Dinesh Karthik fought hard and looked fluent during his 37. He was proactive at the crease and was keeping the opposition on their feet. It was only due to Kieron Pollard’s magnificent 57 not out that Mumbai managed to score 148.

There has been a lot of talk about Mumbai playing Pollard too low down the order. The stage was set for him as he entered the field with four wickets down and more than ten overs to go. Even as wickets fell at the other end, Pollard was in his zone and was timing the ball sweetly.

The rivalry between Pollard and his compatriot Dwayne Bravo was on display as both tried to get the better of each other. One can say that Pollard got the better of the battle as he carted Bravo around from the start. The area over long-on was his favourite as he kept sending sixes there.
Harbhajan Singh also chipped in which a handy knock as Pollard upped the ante in the slog over. The West Indian then finished the innings with another maximum over long-on as Mumbai finished on 148. Pollard finished with 57 off 38 balls — a knock that contained five sixes and four fours.

Mumbai may have done well to get 148, but it was always going to be tough defending it against a strong Chennai batting. In the first over of Chennai’s run-chase, Michael Hussey had a lease of life as Ambati Rayudu dropped a difficult chance at square leg.

Munaf Patel came in to bowl the second over and wasn’t willing to give anything away. The in-form Murali Vijay tried to take the attack to Munaf, but missed once. Vijay then had a brainwave and tried to move across his stumps to guide the ball to fine-leg. Instead, he missed and the ball hit timber.

Meanwhile, Hussey lived a charmed life at the other end as Rohit Sharma dropped him at first-slip off Mitchell Johnson in the third over. Was it going to be Hussey’s day?

Suresh Raina, Chennai’s ever dependable number three walked in and was looking in good touch. With his weakness against the short-ball being common knowledge, Johnson worked him around. He surprised Raina with one that climbed swiftly and then followed it up with a good length delivery. Raina inside edged it on to his pad and the ball lobbed to Ponting on the off-side.

Hussey was holding fort at one end and Bravo joined him in the centre. Chennai finished the powerplay on 36 for two. The duo was playing the waiting game and was only targeting the singles. With the pressure building, Hussey tried to hit out against Harbhajan, but the off-spinner dismissed his woodwork. Chennai were now in a spot of bother at 42 for three in the eight over.

It was slow progress as Chennai’s fifty only came up in the 10th over. The asking rate was rising, but Chennai looked content in building the platform. At the halfway mark, Chennai were 58 for three. They needed 91 off the last ten overs for victory.

However, Bravo fell soon after as he was caught by Karthik off the bowling of Ojha. He had offered a difficult chance off the previous delivery, but Ponting couldn’t hold on. Mumbai started believing that they could breach the Chennai fortress. Its main sentinel entered the stage — Captain Cool Mahendra Singh Dhoni.

An acceleration wasn’t in sight as the batsmen merely rotated strike. The require-rate shot up over 10 and Subramaniam Badrinath was trapped in front by Ojha in the 13th over. The boundaries had dried up and the drought came to an end when Dhoni smashed two fours off Pollard in the 14th over. Chennai needed inspiration and was Dhoni going to be the man?

At the other end, Ravindra Jadeja also joined the party as he welcomed Harbhajan with a huge six over long-off. Dhoni then hit a bullet straight back past Harbhajan for a four. Chennai were now taking the attack to the bowlers and Mumbai could no longer take it easy.

As the match entered the last five overs, Chennai needed 56 to win. Jadeja smashed the first ball of the 16th over for four more through cover. However, Munaf had his revenge as Jadeja dragged one back on to the stumps off the next ball.

With Dhoni in the middle, the danger was still lurking for Mumbai and Chennai felt they were in with a chance. Wickets kept tumbling at the other end as Ravichandran Ashwin was out to Harbhajan Singh after Dhoni had smashed him for six. Like Pollard for Mumbai, Dhoni was lone standing warrior for Chennai.

With 40 needed off 18 balls, all eyes were on Dhoni. Pollard had a good day with the bat, but struggled with the ball. Dhoni hit him for a huge six and then followed it up with two fours. A couple of wides made it 16 off the first three balls of the 18th over. However, Pollard scalped Chennai’s eight wicket in Laughlin to make things more interesting.

Patience is a virtue Dhoni exudes. In the penultimate over, he held on to strike and waited for the opportunity. On the fifth delivery, he hit a huge six over mid-wicket to complete his fifty and then took a single to keep strike.

The game went into the final over with Chennai needing 12 and Dhoni striking it well. Munaf Patel ran in and Dhoni carted the first ball to mid-wicket. Everyone believed that it was going for six and then out of nowhere, the tall frame of Pollard plucked it in the air. With that dismissal, Chennai had all but lost the game as the task was too tall for the last two men.

Mumbai recorded their first win in the tournament. Chennai were left to rue what might have been.

Man of the Match: Kieron Pollard

Padma Bhushan for Vizzy and not even a Padma Shri for Vijay Merchant, Subhash Gupte and Mohinder Amarnath!