Mumbai Indians posted a competitive total of 170 for six against the Kolkata Knight Riders after some inspired batting on either side of a mid-innings collapse in their Indian Premier League (IPL).

Mumbai won by 65 runs
Man of the Match: Sachin Tendulkar 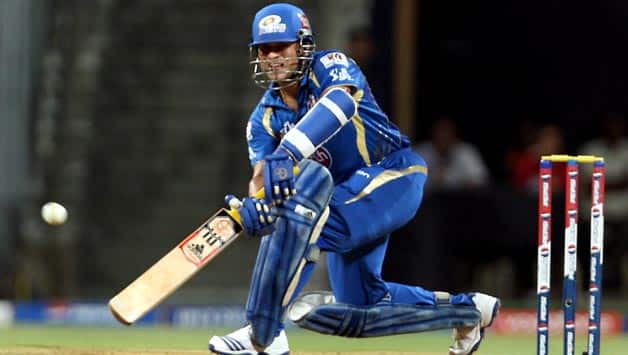 Mumbai Indians posted a competitive total of 170 for six against the Kolkata Knight Riders after some inspired batting on either side of a mid-innings collapse in their Indian Premier League (IPL).

Openers Dwayne Smith (47) and Sachin Tendulkar (48) got MI off to a great start, getting 63 runs in the first nine overs. Tendulkar was desperately in need of a few runs, after having struggled his way to 186 runs in 11 matches and was under pressure of keeping his place in the side. The veteran batsman had looked out of place in this instant cricket format and it appeared as if he wasn’t able to keep up with the demands.

However, Tendulkar stated his intent almost straight away today as he spanked the returning Ryan McLaren for five consecutive boundaries in his first over, sprayed all around the park. Tendulkar brought forth all the shots from his illustrious book — the drives, the pulls, the paddle sweeps, you name it — as he put Mumbai off to a flier. Smith, on the other hand, was struggling to connect bat with ball and rode on his experienced partner’s back upto the first Strategic Timeout, taken gladly by KKR after the ninth over.

The mandatory timeouts have claimed many a set batsman this tournament, and KKR would have hoped for the same in their huddle. As it turned out, the two-and-a-half minute break in momentum for Mumbai was to stretch a further 17 minutes as a couple of floodlight towers at the Wankhede lost power.

After the break, the two Mumbai batsmen added another 30 runs in quick time before Tendulkar’s over-enthusiasm claimed his wicket. The Little Master tried a cheeky little paddle sweep after shuffling across the stumps off the bowling of medium-pacer Rajat Bhatia — a shot that had earned him four runs earlier in the over — but missed the turn and was bowled. A morale-boosting innings of 48 from 28 balls had come to an end, along with a promising partnership of 93. Smith was to follow his partner back to the pavilion soon after, as he holed out to long-on in the very next over.

Mumbai skipper Rohit Sharma, among the top five leading run-scorers in the tournament, hit a boundary and a six before a nonchalant, yet superb piece of fielding from Eoin Morgan sent him packing. Rohit clubbed McLaren towards deep mid-wicket where Morgan converged under the ball and caught it inches from the rope, lost his balance but coolly flicked the ball up in the air before stepping behind the rope and returned to take the catch. The Irishman made it look simple, but it was anything but as MI slipped further down.

A few minutes of madness were to follow for Mumbai as Kieron Pollard (4), Ambati Rayudu (0) and Harbhajan Singh (0) all fell within the space of five balls and all of a sudden, the hosts were on the brink of a dramatic collapse.

However, Dinesh Karthik (34 not out) and Mitchell Johnson (10 not out) held fort till the end, putting on 25 runs in the last over to take Mumbai to a challenging total.

Ousted Tim May focused on ICC's terms of governance