Mumbai Indians have won match 39 of the Indian Premier League 2015 by five wickets.

Mumbai Indians have won match 39 of the Indian Premier League (IPL) 2015 by five wickets against Delhi Daredevils despite the fact that their  chase wasn’t off to the greatest of starts. In fact, they faltered and stumbled on a number of occasions and at one stage it looked like they would lose horribly. Lendl Simmons was dismissed off the first legal delivery of the innings. Zaheer Khan bowled very well and trapped Simmons numb. LIVE Scorecard: MI vs DD Match 39 IPL 2015

Hardik Pandya, who was mysteriously sent one down, was the next man to fall. Nathan Coulter-Nile was the man who picked his wicket. Mumbai Indians’ mood to experiment wasn’t satisfied however as they then sent out Harbhajan Singh who got out for five runs to Coulter-Nile again. LIVE UPDATES: Mumbai Indians vs Delhi Daredevils Match 39 IPL 2015

Parthiv Patel looked to be in good nick but got greedy for boundaries and paid the price by hitting one delivery from Angelo Mathews straight to the cover fielder. By this time Mumbai Indians had lost four wickets for 40 runs before rain interrupted. ALSO READ: Lendl Simmons: Mumbai Indians’ under-noticed superstar

The rain interruption came as a saving grace for the home-side as Rohit Sharma and Ambati Rayudu played very well after the break to stage a healthy recovery. They got the odd boundary and kept the singles coming. Importantly, they staged a sixty run partnership to give MI some hope. ALSO READ: Yuvraj Singh half-century boosts Delhi Daredevils

However, things started looking very difficult when Amit Mishra dismissed Rohit by unleashing the worng one. At this stage Mumbai Indians’ required rate was more than 11 and 53 runs were still to be achieved.

Pollard came in when Rohit was dismissed and so long as he could stick around, the asking rate was never going to be a problem. So his wicket was going to be vital for Delhi Daredevils. Pollard smashed the second ball he faced for six and that shot got DD sweating as it was full of authority.

From there, the confidence rubbed on to Rayudu who also started scoring runs at a quick nick. The fight between sides went into the last couple of overs with MI needing 22 off 12 balls. Pollard smashed the first ball off the penultimate over for a massive six and that set the tone from there. Rayudu got into the zone and started hitting smoothly.

The final over required MI to score eight runs. Rayudu got a single off the first and Pollard pretty much ended the anticipation by smashing the next for a six. They set off for a single the next ball and were excited about the victory.

Delhi Daredevils scored 152 for six. Yuvraj Singh was the man of the innings for Delhi Daredevils scoring 57 off 44 balls to help them recover from a poor start. The innings didn’t start too well for them, with Mayank Agarwal being dismissed on a golden duck off the very first ball in the innings, which was bowled by Lasith Malinga. His fellow opener, Shreyas Iyer, didn’t look at his best during his stay at the crease and was dismissed for 19, despite getting a life earlier.

JP Duminy scored a quick 28 but was dismissed by Jagadeesha Suchith at a crucial stage. Yuvraj Singh and Kedar Jadhav, looked to counter attack and did so with decent affect. However Harbhajan Singh broke the partnership by getting Jadhav stumped.

Harbhajan did a fine job in the middle overs. Not only did he pick thew wickets of Iyer and Jadhav, but also bowled economically, conceding just 11 runs off his four overs and even squeezed in a maiden. With Jadhav’s wicket, it was up to Yuvraj and Angelo Mathews to rebuild and recoup.

They put together a recovering partnership but Mathews failed to switch gears towards the final overs. He looked like he was going to explode by smacking Hardik Pandya for a huge six over midwicket boundary but Pandya got his revenge a couple of balls later when Mathews holed out to deep cover.

Yuvraj stuck around and kept the innings together. He struggled for his timing early on, but got going in the 17th over bowled by Malinga, smashing three consecutive fours to the slinger. He continued the demolition into the next over against Mitchell McClenaghan, smashing him for two big sixes. He was finally dismissed in the penultimate over by Malinga, thanks to a marvellous, diving catch by Lendl Simmons at point. Vinay Kumar then bowled a decent last over conceding nine runs.

Man of the Match: Harbhajan Singh. 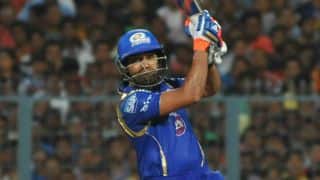 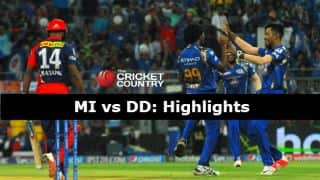