On the big day, MI batsmen managed to put a good score but will it be enough?

Mumbai Indians (MI) scored 187 for six against Chennai Super Kings (CSK) in their Indian Premier League (IPL) 2015 Qualifier 1 at the Wankhede Stadium. Following a good start by the openers, CSK managed to restrict MI to their eventual score. At a time, MI looked good to score over 200. Although this score is good, they would be wary of CSK’s batting strength.  Live Blog: Chennai Super Kings vs Mumbai Indians, Qualifier 2, IPL 2015 at Mumbai

This game was like no other CSK-MI contest at the Wankhede Stadium. Not only was it a qualifier, but CSK were the designated home team for the game as they had topped the table. However, a look at the crowd reflected who the ground belonged to. MI won the toss and elected to bat first, retaining the side that beat Sunrisers Hyderabad (SRH) in the crucial game. CSK made two changes as Brendon McCullum and Ishwar Pandey made way for Dwayne Smith and Mohit Sharma.  Live scorecard:Chennai Super Kings vs Mumbai Indians, Qualifier 1, IPL 2015 at Mumbai

Lendl Simmons and Parthiv Patel were at it again as they constructed a stand of 90 in the first 11 overs. Both batsmen were attacking and played with their usual freedom. Since the two have come together, MI have had those consistent starts at the top. Once they had that 90-run stand, MI were well-placed and looking at a score over 200. However, that is when CSK managed to pull things back.

In the next six overs, MI scored only 49 runs and lost three more wickets. Simmons hit 65 and then holed out to cover. Rohit Sharma started well but hit a Dwayne Bravo-slower ball to the mid-wicket fielder. Hardik Pandya scored a solitary run before smashing it to mid-wicket. Pollard and Ambati Rayudu then had a lot to do in the last few overs to take MI to a good score. It was only Pollard, who cut a lone figure then and was left with the task of smashing it around. Pollard managed to hit quite a few big shots during his knock and that pushed MI to a bigger score. His 17-ball 41 was crucial to MI’s score. IPL 2015: Complete Coverage

Most of the CSK bowlers had a good day barring Pawan Negi, who conceded 46 runs in his four overs. Ashish Nehra was good yet again as he conceded 28 runs for the solitary wicket. As CSK will start their run-chase, they would remember their previous visit to the ground when Dwayne Smith and Brendon McCullum smashed it around in the powerplay and helped them chase a big score. However, McCullum is no longer with the team and it is now left to Smith and Hussey to setup the chase. 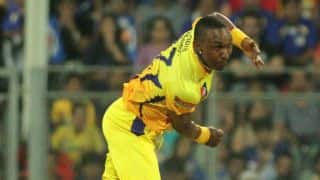