Mumbai Indians take on the Kings XI Punjab in the seventh match of the Indian Premier League (IPL) 2015 tournament.

Mumbai Indians (MI) take on the Kings XI Punjab (KXIP) in the seventh match of the Indian Premier League (IPL) 2015 tournament at the Wankhede Stadium in Mumbai on Friday. Both the teams are coming off from losses and they will be desperate to get a win under their belt in IPL 8.  Catch Live Cricket Scorecard of Mumbai Indians (MI) vs Kings XI Punjab (KXIP) IPL 2015 Match 7 here

Mumbai Indians lost their opening match in the tournament to the defending champions Kolkata Knight Riders by seven wickets, despite producing a fine batting performances. Rohit Sharma and Corey Anderson slammed fine unbeaten half-centuries, with the former scoring 98 not out to indicate the rich form he is in.

The Kings XI Punjab, who were the runners up in IPL 2014, were not up to the mark in their first match as they lost to the Rajasthan Royals by 26 runs at the Maharashtra Cricket Association Ground in Pune on Friday. Rajasthan were the better side as the Kings XI struggled to sustain pressure, despite reducing their opponents to 75 for five at one stage. 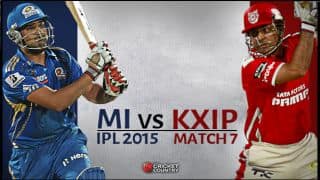