Mumbai Indians (MI) have been on a roll in Indian Premier League (IPL) 2017 but will be wary of Rising Pune Supergiant (RPS) who are coming off back-to-back wins.

Two-time champions and in-form side, Mumbai Indians (MI) lock horns against Steven Smith‘s Rising Pune Supergiant (RPS) in match 28 of Indian Premier League (IPL) 2017. With a head-to-head of 2-1 in favour of RPS and a better record against the hosts at Wankhede (1-0), will visitors be able to win their third consecutive match in a row? The task will certainly not be easy for the Smith’s brigade who are up against a side who seems to be winning from all situations. A win for the hosts will maintain their hold in the numero uno position, whereas RPS will consolidate their position in the top 4 of the points table. Full Cricket Scorecard, Mumbai Indians vs Rising Pune Supergiant, IPL 2017, match 28

There seems to be no stopping Rohit Sharma-led side at the moment. Their only blip came against RPS in their first encounter but they have come a long way since then. With 6 back-to-back victories, MI are at the top of the table with 12 points. Lasith Malinga was not well for the last tie but Mitchell Johnson came and performed decently. This shows that not only are the regulars in good stead, the team management has taken care of the benched players as well. With everything moving in the right direction, MI won’t be looking to tinker too much with their line-up.

Jos Buttler and Parthiv Patel will continue to start the innings. Patel needs some runs under his belt apart from his usual starts. He will like to take charge along with Buttler who has taken his side to some quick starts in no time. Nitish Rana, MI’s most promising talent in the edition so far, will come at No. 3 followed by Rohit Sharma. MI may open the innings with Rohit as well as the right-hander is short of runs and if this happens, they will drop Buttler in the middle-order.

MI bat deep with star players like Kieron Pollard, Krunal Pandya and Hardik Pandya coming in at No. 5, 6 and 7. Veteran duo, Harbhajan Singh and Mitchell Johnson, can also come and slog around at 8 and 9 before Mitchell McClenaghan and Jasprit Bumrah fill up the remaining slots.

Last match’s Man of the Match, McClenaghan along with Johnson, Hardik and Bumrah offer a lot of variety to the pace battery. In the spin arsenal, Rohit can shuffle around Harbhajan and Krunal, wherein the former can put a lid on the scoring and the latter can initiate breakthroughs.

RPS seems to have finally found a winning combination. They defended a modest total against a starry Royal Challengers Bangalore (RCB) on a small ground at M Chinnaswammy Stadium, Bengaluru. To add to it, their most experienced player, MS Dhoni, got back to form in a nerve-wrecking win over Sunrisers Hyderabad (SRH) in Pune. They will also like to retain the winning combination and make it two wins on trot versus MI at their fortress, Wankhede.

Ajinkya Rahane has experienced a dip in form after starting IPL 10 with a fifty. Nonetheless, his half-century came against MI and he will look to return back to scoring runs against the same opposition in his home ground. He will be accompanied by Rahul Tripathi who has been striking the ball with timing and confidence. He will like to make use of the quick outfield and shorter boundaries at Wankhede. Smith will continue to hold fort at No. 3 and carry on from where he left in the last meeting against MI.

Dhoni has shown that he still has the firepower to deliver in crunch situations if he comes in early. He came in at No. 4 in the last tie and scored a match-winning 34-ball 61 (not out). In all likelihood, the former Indian skipper should continue to come after Smith, followed by Ben Stokes and Manoj Tiwary. The latter, RPS’ floater, has been in good form and getting some valuable runs in the death overs. He will look to provide the late impetus against a disciplined bowling line-up comprising of McClenaghan and Bumrah.

Dan Christian can also come in handy with the willow at No. 7. Christian will be followed by Washington Sundar, Imran Tahir, Shardul Thakur and Jaydev Unadkat. Shardul and Unadkat have done a fairly decent job with the ball as well. Shardul has looked impressive by bowling with a lot of steam but will like to have more control in the death overs. In the spin department, Smith can rely upon Tahir and Sundar who enjoyed a good outing in his maiden IPL game versus SRH. Stokes and Christian will also provide enough options for Smith in the middle overs with their full length deliveries and well executed bouncers. Christian has been difficult to get rid of for the oppositions and he will like to bring in all his experience into play against MI.

Predictions: It seems to be a task for RPS to get the better of the hosts in their own den. RPS would be brimming with confidence with two back-to-back victories, but the going won’t be easy against Rohit’s side. MI were 7 for 4, further reduced to 33 for 5, in a chase of 143 against RCB, but emerged victorious from thereon. In their last tie, Delhi Daredevils (DD) had them on the mat by restricting them to 142 for 8, but MI defended the total by 14 runs. They have hit a purple patch and are ticking all the boxes by showing immense character. RPS will like to take a leaf from their win against the hosts in their fortress in the last edition, and capitalise on that to stop a rampant MI outfit. 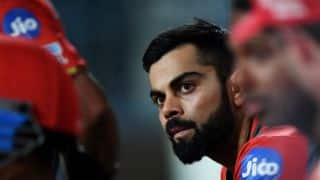