Mumbai Indians openers are off to a steady start scoring in two overs against Southern Express in the fourth qualifier match of the Champions League T20 2014 (CLT20) at Raipur on Sunday. They are 16 for no loss in two overs in chase of 162.

In the first innings of the match, Southern Express took advantage of Mumbai Indians’ sloppy fielding to post a formidable score of 161 for six. The Express batsmen never got going thanks to a disciplined start from the Mumbai bowlers. But some late strikes from Farveez Maharoof (41 not out) and Angelo Perera (28) helped them get past the 150-run mark. Maharoof’s 41 from just 22 deliveries gave Expressthe respectable score.

Both teams are facing a must-win situation to stay alive in the tournament. Mumbai Indians had won the toss and elected to bowl. Praveen Kumar who had a niggle in the shoulder has made way for leggie Shreyas Gopal. The Southern Express have not made any changes to the team. Skipper Mubarak said that it was a short game against Northern Knights and it would be unfair to make changes after losing a 10-over game. Mumbai though have retained their opener Michael Hussey while aggressive all-rounder Corey Anderson remains on the sidelines. 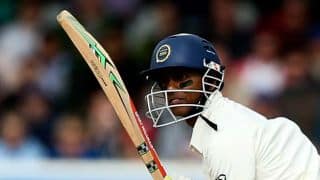