Shahrukh, however, denied he had misbehaved and maintained he reacted only after children.

The infamous Wankhede brawl involving superstar Shah Rukh Khan, during the 2012 Indian Premier League (IPL) match between Mumbai Indians and Kolkata Knight Riders (KKR) has taken a new turn on Friday. According to a report by Times Now the Maharashtra Child Commission has reportedly directed the Mumbai police to file an FIR against Shah Rukh for the Wankhede brawl in 2012.

The actor has been accused by the commission for using ‘foul language’ in front of children. The FIR will be registered under Juvenile Justice (Care and Protection) Act, 2006, IBN Live reported.

Accoding to PTI, The Mumbai Cricket Association (MCA) informed a local police station to prevent KKR principal owner Shah Rukh from entering the stadium. The Bollywood superstar was banned for five years from entering MCA premises, including the Wankhede Stadium, by the Association’s Managing Committee, headed by the late Vilasrao Deshmukh, on May 18 last year, after he was involved in a skirmish with security staff and officials of the cricket body following KKR’s victory over Mumbai two nights earlier.

Shah Rukh, however, denied he had misbehaved and maintained he reacted only after children, including his kids, were “manhandled” by the security staff at the stadium. 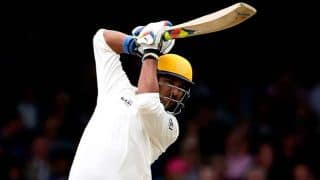 ICC Cricket World Cup 2015: When ‘samosa’ made its debut at the iconic Melbourne Cricket Ground