Chasing 146 to win, Saurashtra failed to get going at the start and managed just 129 for seven.

Mumbai completed a convincing 16-run win over Saurashtra in the West Zone qualifiers of the Mushtaq Ali Trophy at Mumbai on Wednesday. Chasing 146 to win, Saurashtra failed to get going at the start and managed just 129 for seven.

It was an interesting start to the chase from Saurashtra. India’s test No 3 Cheteshwar Pujara faced old warhorse Zaheer Khan in the first over. The left-arm pacer beat Pujara on the second ball but the batsman got the better of Zaheer hitting him for two boundaries later.

It was a steady start for Saurashtra in comparison to Mumbai with Pujara’s fellow opener Sagar Jogiyani going for his strokes. But Jogiyani found it difficult to go after Dhawal Kulkarni. Seeing his aggressive intent, skipper Zaheer brought the thridman in to lure him in to playing a shot there. And Jogiyani fell for the trap caught in the slips trying to glide it past Abhishek Nayar.  Zaheer then brought in veteran leggie Praveen Tambe who conceded three in his first over. With a disciplined bowling performance, Mumbai had pushed Saurashtra on the backfoot straight away. They managed just 19 in the powerplay.

Sheldon Jackson managed to hit a straight six in the seventh over to reduce the pressure of the rising required rate. Pujara, along with Sheldon Jackson tried hard to up the ante but failed to find the boundaries regularly. After Jackson’s dismissal, Jaydev Shah started off on an aggressive not with a slog sweep against Praveen Tambe for six.

But it was the set batsman Pujara who needed to take control. He was timing the ball well but failed to find the boundaries at the start of his innings. As the required rate crept higher, Pujara freed his arms more frequently.  While Pujara accelerated from one end, they lost two wickets in the 18th over on the other end, bagged by Prathamesh Dake. The tight 18th over put the pressure right back on Saurashtra. Pujara eventually was caught brilliantly in the deep off Zaheer’s bowling for 62. Zaheer then bowled Aarpit Vasavda for a golden duck.

Saurashtra would have been chasing a lot less if it had not been a late surge from Sarfaraz Khan scoring 36 and a cameo of 23 in seven balls from Sujit Naik. Mumbai, who were put in to bat were off to a cautious start. Aditya Tare played some sparkling shots while Sushant Marathe struggled to get going. Once the openers departed, Mumbai kept losing wickets at regular intervals.

It was only in the last three overs, Sarfaraz and Sujit powered Mumbai to handy total. With a strong bowling, it was always going to be tough for the visitors. 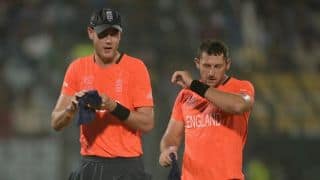 IPL 2014: Corey Anderson set to lose half salary due to injury