Mumbai batsman Yashasvi Jaiswal on Wednesday became the youngest cricketer to record a List-A double century. At 17 years and 192 days, Jaiswal, playing against Jharkhand in Round 2 match of the Vijay Hazare Trophy, hammered 203 off 154 and surpassed South African cricketer Alan Barrow, who was 20 years and 276 days old when he scored a double century for Natal in 1975.

With a third century, Jaiswal has tallied jaw-dropping numbers. In five innings of the 2019/20 Vijay Hazare Trophy, Jaiswal has scored 401 runs at an average of 101.25. During the knock, Jaiswal cleared the boundary 12 times, which is the most number of sixes hit in a Vijay Hazare Trophy match. Jaiswal’s belligerent innings propelled Mumbai to 358/3 in 50 overs.

Jaiswal and his partner Aditya Tare added 200 runs for the opening wicket in 34.3 overs before the wicketkeeper batsman was dismissed for a 102-ball 78 by Anukul Roy. Jaiswal stayed till the end and was dismissed off the third-last ball of the innings. His double is the second of the season, following Sanju Samson’s unbeaten 212 against Goa.

Jaiswal first made headlines during the Under-19 Asia Cup in Dhaka last October, where he scored 113 off 85 in the final as India beat Sri Lanka by 144 runs. He was the leading run-scorer of the tournament with 318 runs. In February 2019, Jaiswal scored 173 against South Africa A, a match which India A had won by an innings and 158 runs with the youngster named Player of the Match.

In July-August this year at the Under-19 tri-series involving England and Bangladesh, Jaiswal scored 294 runs in six innings and led India to a win in the final scoring a 72-ball 50. 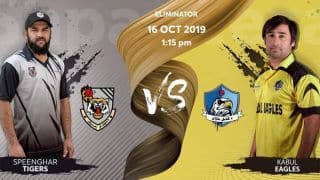