The decision to sanction toilets at the clubs situated at Azad Maidan, Cross Maidan and Oval Maidan has been made.

Mumbai’s iconic Azad Maidan, which has been in existence for over 100 years, is finally set to have toilet facilities of its own. Azad Maidan is considered the grooming ground of some of Mumbai’s famous cricketers Ajit Wadekar, Sunil Gavaskar, Sachin Tendulkar but its clubs were always devoid of toilets

However, Ashish Shelar, the Maharashtra Sports Minister and former Mumbai Cricket Association (MCA) president, revealed that the decision to sanction toilets at the clubs situated at Azad Maidan, Cross Maidan and Oval Maidan has been made, reports the Indian Express.

“We had a meeting with the MCA. The Sports Department will put the matter to the Heritage Committee on the plan prepared by the MCA for the toilet, which is one of the requirements. We will also put up some sort of a dugout for various club tents. I will follow it up with the Heritage Committee to get the necessary permission,” Shelar said.

Former India cricketer Wasim Jaffer was one of the many to welcome the move.

“It should have happened way back but if it’s happening now, it’s welcome,” said Jaffer. “I’ve seen it many times a player before the game rushing to nearby stations as maidans didn’t have a toilet facility. Sometimes, when we were fielding, we’d look around and wonder where a player had disappeared. I’d be told that he would join soon and we would know why. Some used to go to the Churchgate station, some to CST, or you have to go to Fashion street.”

Shardul Thakur also shared his experience of how he struggled to look for public toilets before heading to the grounds.

“I used to take the 4 am train from Palghar to Churchgate and often queue up at the public toilet there because there are none at the maidan. A lunch break is 40 minutes it takes 15 minutes to reach the station and another 15 to return. If the queue is long, add 15 minutes more. By the time a player returns, he has to skip lunch,” said Thakur. 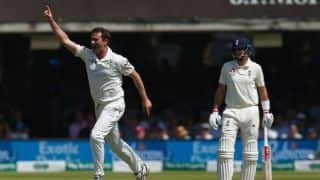