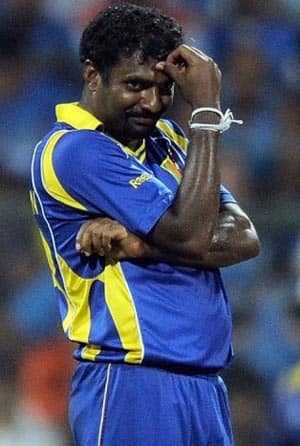 Sri Lanka star Muttiah Muralitharan has admitted his last international appearance had been a letdown following a six-wicket World Cup final defeat by India. The record-breaking 38-year-old, the sole survivor from Sri Lanka’s 1996 World Cup final-winning team, was not the force of old with injuries appearing to hamper him as he bowled a wicketless spell of eight overs for 39 runs.

They were respectable enough figures but hardly the kind of astounding analysis that became commonplace in Muralitharan’s career, which yielded 800 wickets in 133 Tests and 534 in one-day internationals, both world records. “It was a little bit disappointing because my main aim was to win the World Cup,” said Muralitharan on his return to Colombo on Sunday. “But unfortunately we couldn’t do that because India was a better side on the day.”

Sri Lanka, who made 274 for six on the back of Mahela Jayawardene’s unbeaten century, saw fast bowler Lasith Malinga strike twice early on to remove openers Virender Sehwag (nought) and Sachin Tendulkar (18).

However both Muralitharan and fellow off-spinner Suraj Randiv (none for 43) were able to follow-up. “We got enough runs on the board — 274 was a good score. Malinga took two vital wickets but after that we couldn’t crack their side especially in the middle part. The spinners didn’t take enough wickets, that was the main reason.

“If I or Suraj took a few wickets then the story would have been different. These things happen in cricket so you have to move on and I’d like to wish the team well for the future. Hopefully, in 2015 they’ll bring home the Cup.”

Sri Lanka captain Kumar Sangakkara, speaking after the match, had defended his decision to play Muralitharan despite the talismanic bowler’s knee, hamstring and groin problems. “It’s one of those rare days where he hasn’t really done the job for us, but that’s maybe one in 100 games that happens,” Sangakkara said.

“He’s our best bowler, even half fit. But he was fine, he was almost at full fitness. I don’t think it was an issue. We’re going to miss him terribly. Unfortunately, we couldn’t give him a great send off but that’s the way it goes. We were out-played and we have to accept that.”

India captain Mahendra Singh Dhoni, who made a man-of-the-match winning 91 not out, said it was because of his familiarity with Muralitharan that he’d promoted himself above man-of-the-tournament Yuvraj Singh in the batting order. “I have played a lot with Murali and I know his doosra well,” said Dhoni, a teammate at IPL side Chennai Super Kings. “He knows it too. I put pressure on him.”

Muralitharan’s big finish was probably when he took a wicket with his final ball on home soil as Sri Lanka beat New Zealand in the semi-final in Colombo, with thousands of fans watching him chaired round the ground.

He has also won plaudits for his Foundation of Goodness charity, set up to help Sri Lanka from the carnage of the massive 2004 tsunami, and Muralitharan recently announced plans to build a sports complex for war-displaced civilians. “Cricket unites communities, and we can use the game to reach out and help those who are less privileged than us, to make their lives a little bit easier,” he explained.