Discarded Test opener Murali Vijay has vowed to return, stating that he will keep aspiring to compete at the highest level so long as his feet move and his head remains still.

“I will be back playing for India. I am positive, will sort a few things out, make runs firstly, I want India to win the series in England,” the 34-year-old said on the sidelines of his Chennai club Jolly Rovers match at the IIT-Chemplast ground where he hit 37 off 32 balls.

Vijay was dropped from India s Test squad last month after averaging 6.50 in four innings against England, with a pair at Lord s ensuring he did not play the third match at Trent Bridge, which India won. Scores of 0 and 0 at Lord s lowered Vijay s batting average in Tests outside of Asia since the beginning of 2015 to 16.53, a stark comparison to the tours of South Africa, New Zealand, England and Australia in 2013 and 2014 when he made 1000 runs in 12 Tests at an average of 41.66, with two centuries and six fifties.

This was the first time in his Test career that Vijay was axed, but he did not see it as a major roadblock. “It is not the first time this has happened to me,” he said. “I believe age is only a number. As long as my feet move and my head is still, I will continue to play. The English pacemen had their game plan worked out this time, bowling closer to my body and making me play a lot more deliveries.

Vijay is India s fourth most successful Test opener with 3831 runs at 40.32 from that position, with 12 hundreds and 15 fifties. Only two India openers have scored more centuries: Sunil Gavaskar (33) and Virender Sehwag (22). No other opener has made more than Navjot Singh Sidhu s eight Test centuries. 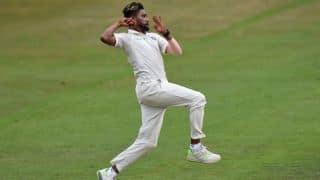