Murali Vijay scored 8 and 0 in the match. However, Ajinkya Rahane got a gritty 49.

Murali Vijay followed his first-innings 8 with a duck at New Road, Worcester as India A were left reeling at 11 for 3 after England Lions asked them to chase 410 in a little over a day. Vijay lasted 5 balls before being cleaned up by Essex seamer Jamie Porter for a duck. Vijay, along with Ajinkya Rahane, turned out for India A for the match to gain practice before the Test series.

Sam Curran, who made his Test debut earlier this year against Pakistan at Headingley, got Prithvi Shaw with his second ball at the other end, caught by Dawid Malan. India A were 0 for 2, 8 balls into their innings. Porter also trapped Mayank Agarwal (1) leg-before in the last over, which brought the day’s play to an end. At the crease was night-watchman Shahbaz Nadeem, on 10.

India A had resumed the day on 144 for 4, 279 behind. Rahane (49) and Rishabh Pant (58) took the score to 189 for 4 before Pant was bowled by Chris Woakes. Woakes and Curran, along with Alastair Cook and Malan, are also utilising the match for valuable practice.

Curran then ran through the Indian tail, finishing with 5 for 43. The last 6 wickets fell for 10. Rory Burns decided to bat despite the 224-run lead. While there was no encore for Cook (who had scored a faultless 268-ball 180 in the first innings). Brisk fifties from Malan and wicketkeeper Ollie Pope allowed Burns to declare towards the end of the day.

Rahane, Vijay, and Pant are all part of India’s 18-member squad for the England Tests. 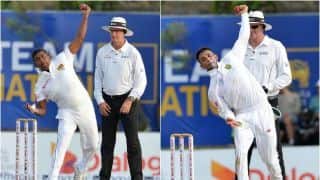 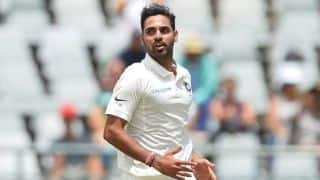