Murali Vijay was widely praised for his batting exploits in the Test series Down Under but the stylish Indian opener says he equally enjoys playing in the shorter formats.

New Delhi: Murali Vijay was widely praised for his batting exploits in the Test series Down Under but the stylish Indian opener says he equally enjoys playing in the shorter formats despite the transition from five-day cricket to T20 being ‘tough’. The 31-year-old also feels that a regular spot in the Test side has helped him develop as a cricketer and his next target is to find a way to play in all three formats. IPL 2015: Exciting to open with Virender Sehwag at Kings XI Punjab, says Murali Vijay

“I started my career thinking I am going to play all three formats and not just Tests. I have finally managed to get a longish stint with the Indian team and that has helped me as a batsman, especially after being on the sidelines for three to four years. I don’t know when I will get to play in the limited over format next but my aim is to play in all three formats and I am working towards it,” Vijay, who is currently playing for Kings XI Punjab in the IPL, told PTI today.

Vijay impressed many with his front foot play and the way he left the ball on Australian pitches, but he is now forced to take risks in the IPL. The same aggressive approach may have led to his dismissal in the first three games but the Chennai-born player says he relishes the challenge of adjusting to all formats. “The thing is that I am playing well and I am confident about my game. So I feel it is only a matter of time before I convert those starts. The format is such that you got to take risks but I am waiting for that one big knock. As a team, it has been a mixed bag for us so far and now we want to win some back to back games,” he said referring to Kings XI Punjab’s two losses and a win in the competition so far. Murali Vijay’s 144 among most runs scored by an Indian on Day 1 of overseas Test

On the switch from Test to T20s, he says: “It is tough, yes, but as a professional you got to be expecting these things ahead of a tournament like the IPL. You have to adapt and whichever tournament you are going to play, you are going to get some preparation time. So in that particular period I think about my game and what I can expect from the next tournament. It is tough but I am enjoying it thoroughly.” Though Vijay has had a decent IPL career with two hundreds to his name, he is seen more as a Test specialist, having played the last of his 14 ODIs almost two years ago and a T20 International more than four years ago. A return to one-day fold will be tough anyway with the Indian team having a set opening pair in ODIs.

Vijay is fully aware of the prevailing scenario and that is why he said he was not disappointed after being ignored for the ICC Cricket World Cup 2015. “Every cricketer wants to play for India in every tournament. I have been batting well but selection is not in my hands. All I can say is that I will try to keep myself fit and ready for the next World Cup,” he quipped when asked about the World Cup snub at the back of a prolific series in Australia. Stat: Murali Vijay, Virat Kohli India’s most successful batsmen against Australia

Before Australia, Vijay also earned plaudits for his performance in England. Although India lost both series convincingly, the gritty Tamil Nadu batsman was one of the biggest gainers in those six months. “If a player gets an opportunity to play for India and he cements his place in the team, it does a lot of good to his confidence. Since the last couple of series I have been playing regularly. The long wait taught me a lot of things and the moment I got the opportunity I wanted to use it. I know how it feels to be on the sidelines for three to four years. Now I just want to play for India on a consistent basis,” he summed up. 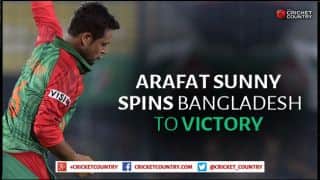