Murali Vijay had to wait for a long time after entering the 90s due to rain interruptions.

Murali Vijay got up his 12th Test century on Day 1 of the India vs Afghanistan Test at M Chinnaswamy Stadium, Bengaluru. Vijay had to wait for a long time on 98 as rain forced an early tea. On resumption, it rained again, this time with Vijay on 99. He finally got his century in style smashing the ball to the off in the last session of Day One. He has hit 15 fours and a six. His stand in the middle didn’t last long after the ton (he was out leg-before to Wafadar Mohamd for 105). Earlier, he and Shikhar Dhawan added 168 to the opening wicket. Dhawan also entered record books, becoming the first Indian and overall sixth player to score a ton before lunch.

Afghanistan, playing their maiden Test, are finding it hard to pick wickets. Rashid Khan has been their most expensive bowler so far, leaking 105 runs from his 17 overs. KL Rahul has accompanied Vijay well, notching up a fifty. 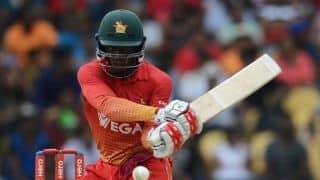