Rahane and Vijay put on 112 for the first wicket after India were sent in to bat, and although the tourists could not fully capitalise.

Harare: India opener Murali Vijay said on Sunday he was not playing ‘at his best’ even though his half-century played a crucial role in their comprehensive win over Zimbabwe in the second One-Day International by 62 runs. READ: India comprehensively beat Zimbabwe by 62 runs in 2nd ODI at Harare to win series

“I was not playing at my best, but according to the conditions we decided not to give early wickets because then the team is under more pressure,” Vijay said. READ: Bhuvneshwar Kumar picks up his 50th ODI wicket for India in 2nd ODI against Zimbabwe at Harare

“We thought 260 or 270 was a good score on this wicket because it was getting slower and lower,” VIjay added. Half-centuries from opening batsmen Ajinkya Rahane and Murali Vijay and four wickets from Bhuvneshwar Kumar saw India beat Zimbabwe by 62 runs in the second one-day international and take an unassailable 2-0 lead in the three-match series on Sunday. READ: Murali Vijay dismissed for 72 in India vs Zimbabwe 2015, 2nd ODI at Harare

Rahane and Vijay put on 112 for the first wicket after India were sent in to bat, and although the tourists could not fully capitalise on that platform, they were still able to post 271 for eight. SCORECARD: India vs Zimbabwe 2nd ODI at Harare

In reply, Zimbabwe were pegged back by Kumar’s brilliant first spell, which brought the wickets of Hamilton Masakadza and the in-form Elton Chigumbura.

Chamu Chibhabha made 72, but the hosts faded after he was run out and they were eventually bowled out for 209, with Kumar finishing with figures of 4 for 33.

After collapsing to 87 for five in Friday’s first ODI, which they still won by four runs, India took a circumspect approach on Sunday as Rahane and Vijay batted out the opening 26 overs. While Rahane’s 63 was his 10th fifty in ODIs, Vijay had never before crossed 33 and so his 72 was a landmark for the Test regular.

Despite their dismissals, India went into the final 10 overs well set on 194 for two, but then lost Friday’s centurion Ambati Rayudu for 41 and Manoj Tiwary for 22. Seamer Neville Madziva ensured that Zimbabwe finished strongly as he picked up three wickets at the death to close with career-best figures of 4 for 49 in 10 overs.

With Kumar taking 2 for 19 in his initial six-over spell, Zimbabwe fell to 43 for three in reply and rarely threatened from that point. When Chibhabha was run out in a mix-up with Sikandar Raza Butt the game was effectively up, and although Richmond Mutumbami and Graeme Cremer put on 52 for the seventh wicket, Kumar returned to finish the job off. The third ODI takes place on Tuesday, and will also be played at Harare Sports Club. 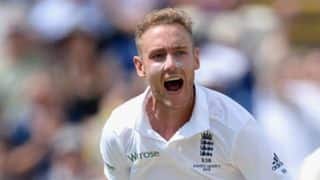 Ashes 2015: Stuart Broad is back to his best, claims Alastair Cook