Murali Vijay registered yet another fifty to keep his good run going in Tests.

Murali Vijay scored his 11th Test half-century in the second Test between India and Sri Lanka at P Sara Oval, Colombo. He did not have happy memories of the first innings as Dhammika Prasad had him dismissed for a duck, trapping in front of the stumps. India are currently 85 for the loss of one wicket. India had a lead of 157 runs at stumps and will be looking to add at least 200 more runs to feel good about their chances to level the series. India lost the first Test at Galle after taking a lead of 192 runs but Dinesh Chandimal’s unbeaten 162 took the game away from India and they collapsed for a score of 112 to lose by 63 runs. Live cricket score India vs Sri Lanka 2015, 2nd Test at Colombo, Day 4

India came back superbly after a brilliant partnership between Angelo Mathews and Lahiru Thirimanne that had steadied Sri Lanka. Mathews scored a superb sixth Test ton before Sri Lanka collapsed to get bowled out for 306, handing India a lead of 87 runs. Amit Mishra was the pick of the bowlers with a spell of four for 43 in his 21 overs of bowling  India earlier posted a total of 393 based on a 164-run stand between Virat Kohli (78) and KL Rahul (108). The lower middle order too chipped in with crucial fifties from Rohit Sharma and Wriddhiman Saha. Rangana Herath took four for 81 for the hosts. Live cricket updates India vs Sri Lanka, 2nd Test at Colombo, Day 4 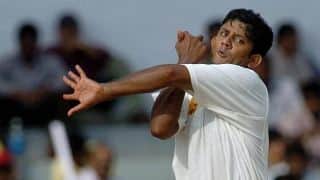