Murali Vijay as looked at his solid best throughout his innings.

Murali Vijay scores his sixth Test century for India during Day Three of the one-off Test against Bangladesh at Fatullah. Vijay continued from his score of 89 not out, which he got during Day One. He could not add to his tally as Day Two was completely washed out due to rain. Vijay will now look to up the ante and score some quick runs in order to ensure India get a huge score at the end of day’s play. Live Cricket Score, India vs Bangladesh 2015, one-off Test at Fatullah, Day 3

With the chances rain still looming large, India will look to consolidate quickly. Shikhar Dhawan is batting well at the other end. The duo have put on an excellent stand and are looking to pile on the misery on the Bangladesh bowlers. Dhawan is nearing his highest score in Tests and he will want to go on get his maiden double century as well. Live Scorecard: Bangladesh vs India 2015, 1st Test, Day 3 at Fatullah

Earlier on Day One, Virat Kohli had won the toss and elected to bat first. he will certainly be happy with the kind of start his team has made. India have brought in off-spinner Harbhajan Singh into the side after a gap of over two years. Litton Das makes his Bangladesh debut. He is keeping wickets in place of skipper Mushfiqur Rahim, who is carrying a finger injury into this match 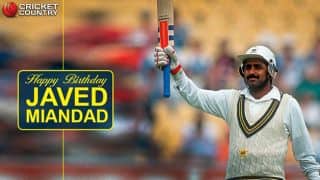