Murali Vijay and Wriddhiman Saha were ruled out of the third and final Test against Sri Lanka.

Indian openeing batsman, Murali Vijay and wicketkeeper-batsman, Wriddhiman Saha were ruled out of the third and final Test against Sri Lanka at Colombo due to respective injuries. They are reported to be replaced by wicketkeeper-batsman, Naman Ojha and opening batsman, Karun Nair. Both the batsmen had suffered a hamstring injury during the second Test at the P Sara Oval in Colombo. Sri Lanka are at present 341 runs short of winning the second Test with eight wickets in hand as India look to win this encounter and level the three-match series 1-1, while Sri Lanka would look to seal the series win from here. Ishant Sharma fined 65 per cent match fee for ICC Code of Conduct breach

India were eyeing a series- levelling victory in the second cricket Test by reducing Sri Lanka to 72 for two after setting the hosts a daunting victory target of 413, riding on Ajinkya Rahane‘s sparkling century. The 27-year-old Rahane (126) notched up his fourth Test century as India declared their second innings at 325 for eight and then snapped up early wickets to leave the islanders in a shaky position at close on an engrossing fourth day, reports PTI. Ajinkya Rahane’s century puts India ahead in 2nd Test against Sri Lanka at Colombo

The highest successful fourth-innings run chase at the venue is 352-9 by the hosts against South Africa in 2006. Kumar Sangakkara, the fifth highest run-getter in Test history, did not have to wait long to bat after Sri Lanka lost opener Kaushal Silva in the third over, tapping a full toss from Ravichandran Ashwin to the short mid-wicket fielder. A full house of some 7,000 home fans applauded warmly as Sangakkara was welcomed to the crease by two guards of honour — one formed by young children with raised bats near the boundary and another by Indian fielders. India on top against Sri Lanka at stumps on Day 4 of 2nd Test at Colombo 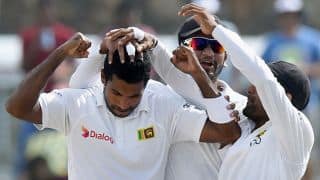