Retired Sri Lankan off-spinner Muttiah Muralitharan is hopeful of being picked by a franchise after the BCCI terminated his present IPL side, Kochi Tuskers Kerala's contract. 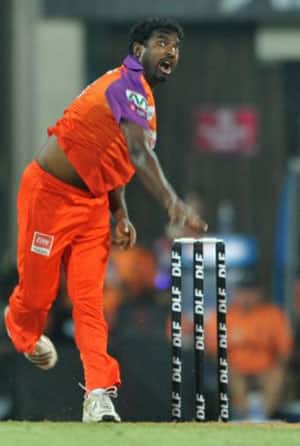 Retired Sri Lankan off-spinner Muttiah Muralitharan is hopeful of being picked by a franchise after the BCCI terminated his present IPL side, Kochi Tuskers Kerala’s contract.

Cracking the whip for breach of contractual terms, the board yesterday terminated Kochi’s contract, a move which prompted the controversial Kerala team to threaten legal action against the Cricket Board.

New BCCI president N Srinivasan even went to the extent of ruling out the possibility of reconsidering the decision but Muralitharan, despite an indifferent outing in the last IPL, is optimistic.

“I am hopeful that if they (Kochi) are not playing, some other franchise will take me as I am fit and playing this format continuously. I want to play two more years in IPL,” Muralitharan told PTI Bhasha from Colombo.

“If the BCCI has decided something, then we can’t do anything. BCCI has taken this decision but I hope that they will arrange something for the 20 contracted players of the franchise. It’s a three-party agreement and we have our three-year contract with BCCI,” he added.

Asked if he foresees a reconciliation before the next tournament, Muralitharan played it safe.

“I don’t know what to say. It is between BCCI and the franchise. Being a contracted player our job is to play for the team. We have nothing to do with administrative matters,” he said.

The off-spinner, who holds the world record for most number of wickets in Test cricket with 800 scalps, did not sound excited when asked about his stint with KTK.

“I think Kochi did not need my services much. My experience with Chennai Super Kings was far better. Kochi team did not play me much. I played only five matches out of 16 in last season when the team made its debut.”

Murali took two wickets for KTK last season whereas, in the first three years with CSK, he had taken 40 wickets in as many matches.

He expressed hope that given more matches, he will be able to repeat that performance. (PTI)