Murugan Ashwin‘s first season of the Indian Premier League (IPL) 2016 was the first time he earned limelight in cricket. The leg-break bowler who played for Rising Pune Supergiants (RPS) was a bowler at the nets for Chennai Super Kings (CSK) and that was the time he came to the notice of coach Stephen Fleming and captain MS Dhoni. But this season’s IPL brought the necessary exposure that Ashwin needed. He picked up 7 wickets in 10 matches before being ruled due to side strain. The spinner though, made most of the opportunity of playing in the elite tournament as he even received tips on his bowling from South African leg-spin bowler Imran Tahir. ALSO READ: IPL 2016: Murugan cherishes playing with Ravichandran Ashwin

Tahir played for Delhi Daredevils in IPL 2016 and was of immense help to Ashwin. “I got to know him during India’s ODI against South Africa at Chepauk last year. Tahir was watching me closely when I was bowling at the nets to the South Africa players. He came up to me and praised the way I was bowling especially the googly. I showed him the grip I use while bowling a googly and he was keen to learn,” said Ashwin as quoted by TOI.

Although Tahir himself didn’t have a good IPL season, his knowledge, skill and experience was there to grasp for Ashwin. “While he was looking to fine tune his googly, I was keen to learn how to bowl the flipper from him. Tahir is someone who bowls it very well, and he didn’t mind sharing the secrets of his skill,” said Ashwin. 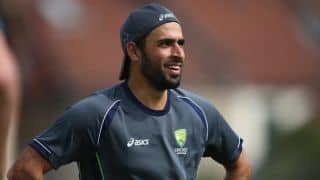