A magnificent century from Mushfiqur Rahim helped Bangladesh to a competitive 261 against Sri Lanka in Asia Cup 2018 opener at the Dubai International Cricket Stadium on Saturday.

A magnificent century from Mushfiqur Rahim helped Bangladesh to a competitive 261 against Sri Lanka in Asia Cup 2018 opener at the Dubai International Cricket Stadium on Saturday.

Rahim’s memorable knock of 144 proved critical amidst twin mini-collapses Bangladesh endured after opting to bat first. Comeback man Lasith Malinga was the wrecker-in-chief as he dismissed Liton Das (0) and Shakib Al Hasan (0) off consecutive deliveries in the very first over of the match.

Bad turned to worse as Tamim Iqbal copped a blow to his left wrist while pulling one from Suranga Lakmal. He retired hurt, leaving Bangladesh, effectively, 3/3 in two overs.

Rahim and Mohammad Mithun then repaired the damage with a 132-run stand for the third wicket to lead Bangladesh recovery. Mithun recorded his maiden ODI fifty before Malinga returned for a second spell to break the stand, scalping him on 63.

That wicket triggered another flurry of wickets as Mushfiqur watched his team lose three wickers for just eight runs. From 134/2, they slipped to 142/5 but Mushfiqur ensured they were on track for a fighting total.

He was fast losing partners from the other end and in danger of being stranded in nineties. However, it was to be his day as he glanced one from Lakmal to fine leg boundary to reach his sixth ODI century, his first against Sri Lanka.

The toll of a long innings began taking its toll on the 31-year-old as he limped in the death overs. Soon Mustafizur was run out on 11 and to everyone’s surprise, Tamim returned to the middle, with a strapped left hand.

Even bizarrely, he faced a delivery batting with just one hand. While the decision looked a bit absurd in the beginning but Rahim made sure it turned out to be a masterstroke as he clubbed three fours and three sixes in the final three overs to reach 144 – equaling the record of the second highest individual total total in Asia Cup history before holing out Kusal Mendis in the last over.

Malinga finished with figures of 4/23 on international return Dhananjaya de Silva chipped in with 2/38 as Bangladesh were bowled out for 261 in 49.3 overs. 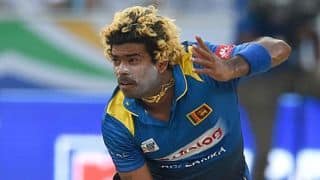 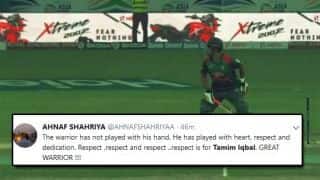