SRH defeated table-toppers Gujarat Lions (GL) in the Qualifier 2 at Delhi on Friday and qualified for the final of this season of IPL.

One of the two Bangladesh players to play the ninth season of Indian Premier League (IPL), Mustafizur Rahman has grabbed attention of the cricket fans all across the world and former cricketers are among them. With an outstanding action and low economy, Mustafizur has been one of the key players for the finalists Sunrisers Hyderabad (SRH) and players like Rameez Raza, Krishnamachari Srikkanth and Manoj Prabhakar have praised the young bowler’s  maturity that he showed. SRH defeated table-toppers Gujarat Lions (GL) in the Qualifier 2 at Delhi on Friday and qualified for the final of this season of IPL. FULL CRICKET SCORECARD: Gujarat Lions vs Sunrisers Hyderabad, IPL 2016, Qualifier 2 at Delhi

As reported by Cricbuzz, Former Pakistan skipper Rameez Raza said, “There are quite a lot of them like James Anderson or Steyn, who are very good in Tests. But right now, Mustafizur is the best pacer in limited-overs. Wahab Riaz is also good, but he is generally in his elements in Tests.”

While Manoj Prabhakar was quoted saying, “There is no doubt that Mustafizur is the best bowler right now. Sri Lanka’s Lasith Malinga was one who could bowl good yorkers. But right now, Mustafizur is at his peak. He bowls the cutters really fast and has other variations, which he delivers with the same momentum. If you are struggling to control the swing, it becomes important to bowl cross seam. But Mustafizur doesn’t need to do that.”

Srikkanth said he feels the bowler needs to continue with his form. “There aren’t too many better than him at the moment. But he needs to perform like this for some more time before we can say he is the best. For now, he looks ahead of the pack.” 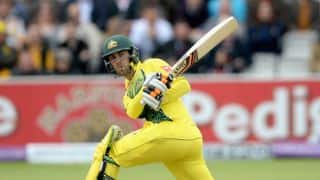