Dhaka: Mustafizur Rahman‘s participation in the English Twenty20 tournament for Sussex was thrown into doubt today after Bangladesh cricket officials said they feared the paceman may be suffering from burnout. The 20-year-old bowling sensation, nicknamed Fizz, returned home this week to a hero’s welcome after helping Sunrisers Hyderabad win their maiden Indian Premier League title with 17 wickets from 16 matches. Rahman was named emerging player of the tournament, the first foreign cricketer to be bestowed with the honour, after conceding just 6.9 runs per over, the most miserly among those who bowled in at least 10 matches. READ: Mustafizur Rahman has no plans of stopping, still eager to learn

He is scheduled to join English county side Sussex next week after signing as their second overseas cricketer in March for the NatWest T20 Blast and the Royal London One-Day Cup. But his participation appeared to hit a stumbling block after the Bangladesh Cricket Board said they would first assess his health before allowing him to join the English side. “We will assess his condition next week before making a final decision on whether he’ll be allowed to play in England,” BCB chief executive officer Nizamuddin Chowdhury told AFP. READ: Mustafizur Rahman impresses former cricketers

Bangladesh national team physio Baizidul Islam said Rahman did not aggravate any of his injuries in the IPL, but that the board was worried over his recent workload. “We must consider that he played 19 matches in two months after recovering from injuries,” Islam said. “So there must be some fatigue. He also developed some problems in his right ankle which is creating a problem for his landing after completing a delivery,” he said.

“He needs some rest to remove the stress. If he continues like this he may collapse any time. We need to assess him carefully to see how long he needs to stay away from cricket,” he added. Rahman missed two Twenty20 Internationals against Zimbabwe in January for a shoulder injury, which also kept him sidelined for the first edition of the Pakistan Super League in the United Arab Emirates.

He returned home for the Asia Cup but picked up a rib injury during a match against Sri Lanka to miss the final and then four matches in the subsequent ICC World Twenty20 in India. Fans gave Rahman a warm reception on Monday after his successful stint in the IPL made headlines at home. A deputy minister called him a “national hero” as he and hundreds of fans received him at the airport with a crown of red roses. 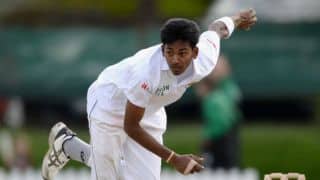