Another pacer Mohammad Shahid has suffered a knee injury in the ongoing Bangladesh Premier League 2016.

With Bangladesh‘s training camp in Australia only days away, maverick pacer Mustafizur Rahman‘s prospects of returning to the team from rehabilitation are getting bright. The left-arm seamer and other injured pacer Ebadat Hossain have bowled long spells under the supervision of national team trainer Mario Villavarayan at the Academy ground on Sunday. Both are close to full fitness, according to Bangladesh Cricket Board’s (BCB) chief physician Debashish Chowdhury.

“Mustafizur and Ebadat have bowled with an intensity of 80-90 percent of the abilities in the practice session this morning. Our trainer is very happy with their progress. The good news is they were able to bowl two spells…without any discomfort,” Chowdhury stated.

“The thing is bowling at such intensity means they are almost fit. If they are giving 80 percent here, we can assume they have achieved (full fitness). We only have a few days left. Another gym session and bowling session will be held in the meantime. The selectors or the team management will then consider sending them to Australia or New Zealand”, added Chowdhury.

A provisional squad will fly to Australia in two contingents on December 9 and 10. After taking part in a training camp in Sydney, the final squad will head for New Zealand on December 18. Chowdhury believes the pace duo can train with the others in Australia.

“We are assuming they will be able to follow the training drills and schedule that the other bowlers will follow there.”

Another pacer, Mohammad Shahid, has suffered a knee injury in the ongoing Bangladesh Premier League 2016. Speaking on his injury, Chowdhury quoted, “He suffered the injury last week. We ran tests on his (anterior crutiate) ligament injury today. His knee is better than before…but he still needs to rest for a week more. We will assess the injury again in a couple of days later and then we will be able to tell you about the next step”, concluded the physician. 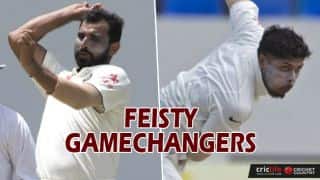