Hospital officials say that Mustafizur Rahman will be out of action for at least four months.

Dhaka: Bangladesh’s Mustafizur Rahman had shoulder surgery in London on Thursday, but officials said the bowling sensation will remain off the pitch for at least four months. The promising young paceman, nicknamed Fizz, aggravated an old shoulder injury last month during his short stint with Sussex in the ongoing Twenty20 Blast competition, playing two matches before being sidelined. “The operation was successful and we are now wishing him a quick recovery,” Bangladesh Cricket Board (BCB) Jalal Yunus told AFP after the hour-long operation. “He will spend the night at the hospital today [Thursday] and will be released in the morning,” he added. READ: Mustafizur Rahman ruled out for 6 months due to shoulder injury

The shoulder injury has ended his county stint with Sussex Sharks in the NatWest T20 Blast and Royal London One-Day Cup. Mustafizur last played for Bangladesh in the T20 World Cup 2016 in India, where his side crashed out in the group stages. READ: How Mustafizur Rahman fared for Sussex in his debut stint

BCB officials have said Rahman will remain sidelined for four to five months following the operation on his shoulder, first injured during a match against Zimbabwe in November last year. The injury, a tear in his bowling shoulder, had already ruled him out of the upcoming home series against England and he is also unlikely to play in Bangladesh’s next away series against New Zealand in December-January. Day 3 Report: Play called off between India and West Indies due to persistent rain 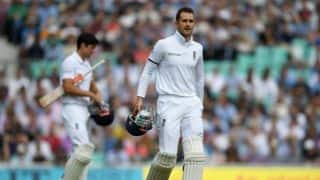