Owing to Sunrisers Hyderabad‘s (SRH) seamer Bhuvneshwar Kumar‘s ability to swing the ball, and also stop the flow of the runs, especially during the slog overs, Sri Lankan legendary spinner Muttiah Muralitharan has come up with a heap of praise for the young seamer, saying that he is one of the best pace bowlers in the tournament till date. Muralitharan also praised Rising Pune Supergiant’s (RPS) MS Dhoni, whose fine form in the previous game against the defending champions Hyderabad, allowed them to register a splendid by six wickets. He defended Bhuvneshwar’s expensive spell by crediting Dhoni and saying that there is hardly anything a bowler can do if the batsman is in such fine form. IPL 2017: Mohammed Siraj keen to learn from Bhuvneshwar Kumar

“Over the last four, five years that I have been seeing him, he is the best bowler in IPL history. He bowls two overs in the Powerplay and two at the death and his economy rate is so low. Unfortunately he has not played much T20 cricket for India. He will be a very big prospect for India as well, in these conditions or in any conditions. Hopefully, people will realise that. He is one of the most successful bowlers in IPL history as a fast bowler,” said Muralitharan, as reported by PTI. Muttiah Muralitharan set to become 1st Sri Lankan to be inducted in ICC Hall of Fame

Speaking on Dhoni’s performance against Hyderabad, he said, “That was Dhoni s day, it happens. Every bowler cannot go quiet every time. Dhoni is such a class player … Ten runs went off Bhuvneshwar of very good yorkers. It happens in cricket.” He also refused to comment much on the decision by Pune to drop Dhoni as the skipper. “It is not for me to judge that but he is a world-class captain. We cannot comment. It is all about the decision the owners take. I don’t know what the story is,” he said.

He concluded with a heap of praise for the Afghanistan spinners playing in the tournament for Hyderabad. “The spinners from Afghanistan, including Rashid Khan, have done brilliantly. They have delivered more than what we expected,” he concluded. 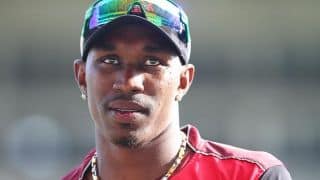