Muttiah Muralitharan has 800 Test wickets to his name.

New Delhi: With International Cricket Council (ICC) cracking down heavily on spinners with suspect action, SunRisers Hyderabad bowling coach Muttiah Muralitharan feels youngsters should try to bowl deliveries that come naturally to them. Kolkata Knight Riders (KKR) turned lucky before Indian Premier League (IPL) after ace spinner Sunil Narine was cleared by the Board of Control for Cricket in India (BCCI) to bowl in the competition. Muralitharan, who has bagged a record 800 Test scalps, had a note of caution for youngsters—to bowl within their limitations. READ: IPL 2015: Shakib-Al-Hasan relieved after Sunil Narine gets clearance to bowl from BCCI

“There is a certain degree of bend allowed and if you can’t spin the ball within that rule, then you simply can’t do it. So if they can’t bowl that delivery but still try do that, then it’s trouble. If you can bowl with a 15 degree bend then it’s fine, if you can’t, just don’t bowl it,” the Sri Lankan spin legend told PTI in an interview. IPL 2015: CSK, KKR, RCB, KXIP, MI, RR, SRH, DD full team details in IPL 8

“Everyone cannot hit shots like Gayle. So similarly while bowling, you can’t imitate what others are doing because you might get into trouble. Like batsmen will get out while imitating a Gayle shot. These youngsters watch somebody on TV and then try and imitate it. But that doesn’t work. Somethings come naturally to you. Nobody can bowl a slider as well as Shane Warne can do. Some genius can do that but if you can’t just don’t do it,” he added.IPL 2015: Tom Moody optimistic of Sunrisers Hyderabad’s (SRH) chances

The 42-year-old Murali, who has been a part of Chennai Super Kings and Royal Challengers Bangalore as a player in the previous editions, asserts that spinners play a big part in T20 cricket. “In every format of the game, be it ODIs, T20 or Test cricket, you need spinners. Spinners form an important composition of your team. Every team has two or three spinners, especially in T20 cricket you have more spinners. Kevin Pietersen to opt out of IPL 2015

Because spinners have more chance of getting a wicket and hence they will continue to play a big role in the shortest format,” he said.
Muralitharan adds that most of the spinners rely on the containing act in T20. “See 90 per cent of the bowlers are trying to contain runs. One has limited number of overs in hand, therefore batsman wants to get quick runs. They have a go from the very first ball and so the chances of getting a wicket is more. Sunrisers Hyderabad buy sensibly and have a formidable unit

Even while trying to restrict a batsman, you can get a wicket.” Having spent some time with his new franchise SRH, Muralitharan was hopeful about Indian spinners Karn Sharma and Parveez Rasool making it big one day. IPL 2015 Auction: Full list of players bought by Sunrisers Hyderabad (SRH) for IPL 8

“Both Karn and Rasool are very good spinners and SRH is blessed with a good stock of spinners. Karn has already played for India and Rasool is working towards it. I think they will certainly improve. As players, they are still learning and IPL will give them a platform to show their performance to the selectors to get a chance of getting into the Indian cricket team,” Murali said. READ: Muralitharan appointed Sunrisers bowling coach

“In T20 and one dayers, they are very good but have a long way to go in Test cricket. In the longest format, you have to bowl long spells and then only you know your real worth. And with experience you get better in Test cricket,” he added. After succesful first three seasons with CSK (2008-10), Murali didn’t enjoy a very good stint with RCB (2012-14) but the off-spinner has high praise for the champion sides. READ: Indian Premier League 2015 schedule: IPL 8 match time table with venue details

“Well CSK and RCB have certainly got big names, no doubt about it. In terms of names, quality and experience they are obviously the top two teams in IPL. But at the end of the day, it’s not about the names, the one who performs on the field on that particular day counts. That’s been my theory all my life. READ: IPL 2015 Auction: Full list of players bought by Mumbai Indians (MI) for IPL 8

“Names will give you reputation, but reputation will not win you matches. Performance in the middle will win you matches. CSK have been the beat T20 side in this country in the last 8 seasons compared to KKR or anybody. RCB has been a very good side but never been able to cross the line,” he said. IPL 2015 Auction: Full list of players bought by Royal Challengers Bangalore (RCB) for IPL 8

The ‘smiling assasin’ as he was fondly called, has high hopes from his side, which may not be high on brand value but great on ability.”Definitely ours is a very good side, with players of good ability. But T20 is an unpredictable game. You have eight sides and it’s a level playing field. Very difficult to say this team is better from the other. IPL 2015 Auction: Kolkata Knight Riders full list of players bought

“But we have great players like Warner ans Shikhar Dhawan, very good pacers like Steyn and Boult. Very good spinners and good young Indian batsman in Naman Ojha and KL Rahul so we are at par with any top side in this competition,” he opined.

From an international career spanning 19 years to a playing his trade in various T20 leagues around the world, life has come full circle for Murali as a coach. He is happy with the way things have turned out. “One day you have to stop and I think the right time was last year. Then I joined the Kolkata academy – for Cricket Association of Bengal – as a spin consultant. And then came this opportunity and I took it right away,” he signed off. 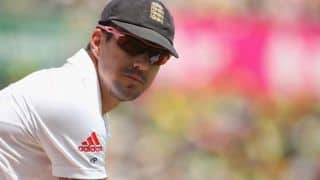