The case is of Italian PM Silvio Berlusconi, who remains one of Italy's richest men, having built a fortune that Forbes magazine estimated at $6.2 billion.

When the Indian Premier League (IPL) betting scandal was unravelling last year, with exposures of Sreesanth of Rajasthan Royals and Gurunath Meiyappan of the Chennai Super Kings (CSK) colluding with syndicates in the UAE, then BCCI president N.Srinivasan’s, (who was also owner of the CSK, and Meiyappan’s father-in-law) response to calls for him to resign was that he himself had “done no wrong”. He was very right, except that even before the Justice R.M. Lodha committee earlier this month suspended CSK and Rajasthan Royals from the IPL, the Supreme Court had righted Srinivasan’s “original sin” of conflict of interest, when it forced him to divest his company India Cements’ ownership of CSK to a separate trust. READ: ICC Chairman N Srinivasan arrives from US

In the meanwhile, Srinivasan was also ousted from control of the the Indian cricket Board that came as a fallout of the apex court’s investigations into the IPL match fixing.

One would tend to believe Srinivasan when he says he has done no wrong, particularly when his conflict of interest was already a matter of an earlier appeal in the Supreme Court by former Board president A.C. Muthiah. He had contested Srinivasan’s pushing through an amendment of the Board’s constitution that permitted him to don both hats of owner of CSK as well as of an official of the Board that organises the IPL.

Now that he has formally surrendered ownership of the cricket team, Srinivasan is on stronger ground stonewalling calls for him to resign on grounds of propriety as president of the Intenational Cricket Council, after CSK was barred earlier this month. READ: Shashank Manohar blames N Srinivasan for IPL mess; Asks him to step down as ICC chairman

A legal definition of conflict of interest describes the situation as when an individual’s personal interests or concerns are inconsistent with the best for a customer, or when a public official’s personal interests are contrary to his or her loyalty to public business. An attorney, for instance, cannot represent two parties in a dispute and must avoid even the appearance of conflict.

In fact, the case has similarities with that involving the IPL ex-commissioner Lalit Modi, when one considers that his legal attorney happens to be the daughter of External Affairs Minister Sushma Swaraj, who interceded on his behalf with the British authorities.

The most celebrated case of conflict of interest in the Western world comes in recent times from Italy, which historian Aijaz Ahmad says has an “uncanny resemblance” with India, in the way the former is different from other European nations in being home to both a “classical civilisation” and an empire of continental proportions, and in the way this legacy has shaped the trajectory to modernity for both countries.

The case is of three-time Italian prime minister Silvio Berlusconi, who remains one of Italy’s richest men, having built a fortune that Forbes magazine estimated at $6.2 billion. His holding company – Fininvest – controls a media empire, the AC Milan football club and has dozens of other companies under its umbrella. READ: IPL franchise’s question on BCCI’s final call

After years of battling allegations of conflict of interest – and corruption – Berlusconi was finally convicted of tax fraud in 2013, sentenced to four years in prison and ejected from his seat in the Italian Senate. The prison term was converted into a year of community service because of his advanced age.

But should Srinivasan step down? Having paid the price (small, though) earlier, it may be too much to ask him to step down from the international body because his son-in-law has been held guilty of wrong doing. One can give him benefit of doubt till something stronger comes along to fell him, as it did Berlusconi. 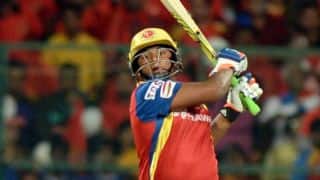