Mumbai: Ousted BCCI President N Srinivasan on Sunday attended the meeting of various state associations with the Supreme Court appointed Committee of Administrators (CoA). Srinivasan, who represented Tamil Nadu Cricket Association (TNCA), walked into the BCCI headquarters here this morning at around 10.45 am and came out of the meeting by 12.30 pm. However, he did not speak to the waiting media. Former BCCI secretary Niranjan Shah also attended the meeting along with Srinivasan. Former India skipper and Cricket Association of Bengal Sourav Ganguly came for the meeting in the afternoon. BCCI should come clean about Kohli-Kumble spat, says Anurag

On Saturday, CoA head Vinod Rai had clarified that it was not their mandate to decided the eligibility or ineligibility of the people attending the meeting. TNCA’s Executive Committee nominated Srinivasan to be the association’s representative at the meet. Meanwhile, Anil Kumble s resignation as chief coach may come up for discussion at the BCCI s Special General Meeting tomorrow where the primary agenda will be One State One Vote and the reinstatement of a five-member selection committee. The Kumble issue is not on the agenda for the SGM but it is likely to be raised by members. The members may ask acting Secretary Amitabh Chaudhary and CEO Rahul Johri as to what was the situation that led to Anil Kumble stepping down from the chief coach s post, a state unit official told PTI. Kumble’s resignation, ‘One State One Vote’ set to take centre stage in upcoming BCCI SGM

The state units on Sunday met the COA in two batches. The issues pertaining to the Lodha Committee reforms was once again discussed. It is learnt that all state units are on the same page on the One State One Vote issue. 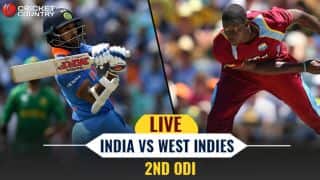