Indian Supreme Court made it clear Monday that N Srinivasan, reelected as BCCI President, will not participate in matters relating to IPL and the spot fixing issue, observing there is "something seriously wrong" with the apex cricket body which has lost its credibility. 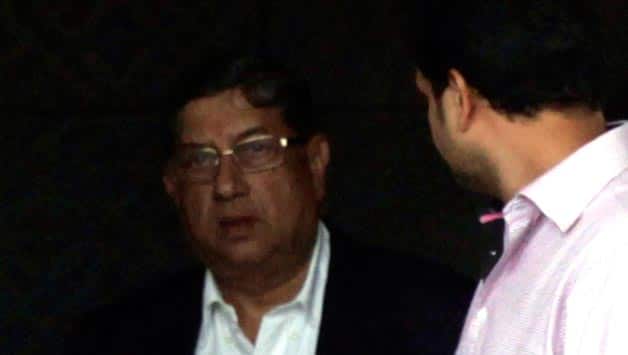 Indian Supreme Court made it clear Monday that N Srinivasan, reelected as BCCI President, will not participate in matters relating to IPL and the spot fixing issue, observing there is “something seriously wrong” with the apex cricket body which has lost its credibility.

“He will continue [as BCCI President] but will not participate in the IPL issue,” the apex court said, noting that “the fairness of the probe should not be affected”.

The court asked Srinivasan not to be in a “hurry” and allow the Cricket Association of Bihar (CAB) to mull over his suggestion that a committee under the chairmanship of either Arun Jaitley or Vinay Dutta, both of whom are lawyers, be constituted to probe the IPL spot fixing scandal, also involving his son-in-law Gurunath Meiyappan.

“Don’t be in hurry. Give them (CAB) the proposal and let them consider your suggestion,” a bench of justices A K Patnaik and J S Kehar said, adding that the court will have to see the “effect” of his presidentship on the free and fair probe into IPL spot-fixing case.

“One thing is clear from the fact that so many things are coming from the IPL. So many things are there. Something is seriously wrong with the apex cricket body,” the bench said, adding, “Please tell us, as to why it (BCCI) has lost the credibility.”

“Oh, we are back,” one of judges of the bench remarked at the start of the hearing and then, the other judge said, “he (Srinivasan) is also back.”

“You (Srinivasan) are there now [as President]. Only thing we have to see how far you being there [as BCCI President] will affect the probe,” the bench said.

Senior advocate C A Sundaram, appearing for BCCI, said certain actions, as per the constitution of the cricketing body, are required to be done by the President and it was willing to assure the bench that “so far as IPL is considered, he (Srinivasan) will have no role.”

He then suggested constitution of a committee for probing the IPL spot fixing by a panel to be headed either by Jaitely or by Dutta.

Senior advocate Harish Salve, appearing for CAB, said, “the IPL is part of BCCI. Moreover, the son-in-law is the principal of the team [Chennai Super Kings], which is owned by India Cements. Srinivasan is a part of the compamy [India Cements].”

He said the team principal is involved in betting and is the son-in-law of the BCCI President, who also owns the India Cements, owner of the CSK and the question of cancelling the franchise of the team will come to him.

“In this scenario, integrity of process has to be maintained. The entire probe of the IPL has to be taken out of the BCCI,” Salve said and called for independent inquiry.

However, he said CAB will consider BCCI’s proposal.

“Let us apply our mind as to how the probe has to be done because there has been a rot and we have to see whether the rot is limited to IPL or how long the rot runs deep and has any bearing on BCCI,” the senior advocate said.

The court then fixed the matter for hearing on October 7 and assured expeditious disposal of the case.

Earlier, the apex court had restrained Srinivasan from assuming the top post in the event of his re-election until further orders by it.

The court, which had allowed the Board to hold its proposed Annual General Meeting on September 29 in Chennai, had said Srinivasan will have to wait to take charge if elected again as president of the cash-rich body until it decides the matter.

The court was hearing the plea of CAB seeking interim injunction restraining Srinivasan from contesting for the post of BCCI President in the AGM to be held in Chennai.

CAB had also sought a direction to BCCI that Srinivasan be not inducted in any committee of the Board till the matter pending in the apex court is decided.

The court had earlier posted for October the hearing on cross appeals filed by BCCI and CAB against the Bombay High Court’s verdict declaring as illegal the probe panel appointed by the Board to look into the spot-fixing scandal.

It had on August 30 heard the petition filed by Aditya Verma, Secretary, CAB, challenging the high court’s order refusing to appoint a fresh committee to probe the scam.

The court had also issued notices to BCCI, Srinivasan, his company India Cements which owns IPL team Chennai Super Kings, and Rajasthan Royals on the plea.

CAB has pleaded that when the high court declared the panel of two judges as unconstitutional, it should have appointed a fresh committee to look into the issue.

The apex court had on August 7 refused to grant interim stay on high court verdict, derailing the plan of Srinivasan to return as chief of BCCI.

Srinivasan had stepped aside from discharging his duties as BCCI President in the light of spot-fixing and betting scandal which allegedly involved Chennai Super Kings team’s former principal Meiyappan.

The high court order had come on July 30, just two days after the panel comprising two former judges of the Madras High Court Justices T Jayarama Chouta and R Balasubramanian, submitted its report giving a clean chit to all those against whom the probe was conducted.