The battle for BCCI's chief's role is following the demise of 75-year-old Jagmohan Dalmiya.

N Srinivasan reported had a meeting with former Board of Control for Cricket in India (BCCI) chief Sharad Pawar on Wednesday evening in Nagpur regarding the succession battle in the cricket board following the death of Jagmohan Dalmiya, who passed away on Sunday at the age of 75. The Supreme Court had axed Srinivasan from the president post if the board in March 2014 in order to ensure a fair probe into the Indian Premier League (IPL) 2013 fixing and betting scandal which had his son-in-law Gurunath Meiyappan’s involvement. Since then, the administrator has not been in good terms with the BCCI officials, with the most recent General Meeting being adjourned due to his presence. READ: Rajeev Shukla way ahead of Sharad Pawar for BCCI interim president’s post

According to Times of India, the current ICC president arrived for the meeting with Pawar late at night and the meeting which took place at the residence of former central minister and NCP leader Praful Patel reportedly ended at around 10.30 pm. It was not known if Shashank Manohar, who hails from Nagpur too, was present at the meeting. In the aftermath of the 2013 IPL betting scandal, Manohar has been the most vocal critic of Srinivasan within the BCCI.

Recently, an official closely related to the Tamil Nadu Cricket Association president suggested that for Pawar to become BCCI chief again he would have to have the Indian cement’s owner’s backing.

The BCCI is supposed to call a Special General Meeting (SGM) to take a call on the issue and the new president will need a proposer and seconder from the East Zone, whose turn it is to field the BCCI chief. It is believed that Finance Minister Arun Jaitley favours Shukla over Mumbai Cricket Association (MCA) head Pawar. READ: Sharad Pawar, Rajeev Shukla, Amitabh Choudhary in contention to head BCCI 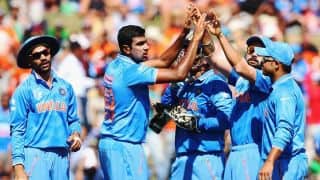 POLL: Should Indian players be allowed in PSL?