Karachi: The Pakistan Cricket Board Chairman Najam Sethi is hopeful of more countries agreeing to play international cricket when he meets Board officials of other nations at the International Cricket Council  meeting in Kolkata later this month. “The ICC meeting will be an important platform for us to talk to other board officials and try to convince them to send teams to Pakistan for bilateral series,” Sethi told the media today.

The ICC meeting in Kolkata from April 22-26 is expected to give final touches to the new Future Tours Program to run from 2019. Sethi said that after successfully hosting the PSL final and the three T20 series against the West Indies in Karachi, the PCB was in a position to try to convince the other Boards to support Pakistan cricket by sending teams for series. “The good thing is that Giles Clarke who heads the ICC’s Special Task Force on Pakistan Cricket will also be briefing the ICC Board members on the return of international cricket to Pakistan,” Sethi said.

He said Clarke was happy with the way the PCB had organised the PSL  final and T20 series and was confident that a top-five Test team could be convinced to play in Pakistan.  “We have gradually shown the world that international cricket can be played in Pakistan. From last year we now have two venues which can host any team with the required security arrangements, Lahore and Karachi,” Sethi said.

Sethi said Pakistan had involved top security experts approved by the ICC and who were in touch with FICA and other Boards while making security plans for the matches in Lahore and Karachi.

With two home series lined up against Australia and New Zealand in the UAE later this year, Sethi said slowly and surely the time would come when even top teams will come to Pakistan.

He said the ICC meeting would also be a platform to assess the mood of the Indian Board officials on cricketing bilateral relations with Pakistan, which remain suspended since 2008.

Sources said that given the tension between Pakistan and India, the PCB has already started the process of getting the required visa for Sethi and other PCB officials to travel to Kolkata for the ICC meeting. 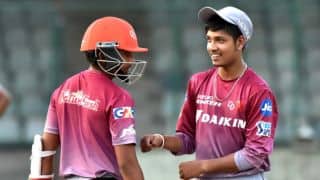