Naman Ojha and Ambati Rayudu hit unbeaten centuries each to rescue India A to 285 for five in their second innings on the fourth and final day as the unofficial Test match against Australia A ended in a draw at Allan Border Field.

After an unconquered double ton in the first innings, Ojha produced yet another unbeaten knock of 101, studded with 11 fours and five sixes, and shared an unbroken 199-run stand with Rayudu for the sixth wicket, to resurrect India A’s second innings after the visitors were reduced to 86 for five in 25.2 overs.

Rayudu hit a 165-ball 100 not out with the help of 17 fours and a six. Chadd Sayers was the pick of the bowlers for Australia A as he scalped three for 48, while Moises Henriques and Ben Cutting took one wicket each in the second innings. Earlier, resuming their first innings at 522 for nine, the hosts could add just 12 more runs before Cameron Boyce was dismissed by Jasprit Bumrah with wicketkeeper Ojha taking the catch in the 141st over.

India A’s top order once again failed to fire in their second essay as Cutting struck the first blow, dismissing Robin Uthappa (15) in the eighth over with a short ball, which the opener lobbed back with Whiteman taking a diving catch. In the 17th over, Whiteman got into action once again when he pouched on to an edge from Jiwanjot Singh, who failed to negotiate a back of a length delivery from Henriques. Three overs later, Manoj Tiwary went for a duck when he was adjudged leg before by the umpire off a Sayers’ delivery with India A slipping to 58 for three.

Karun Nair, too, ended up giving a simple catch to Mitchell Marsh at short cover off Sayers, while opener Lokesh Rahul, who had been solid at the other end, suffered from a lapse of concentration in the 26th over and paid the price for playing across the line, becoming Sayers’ third victim. 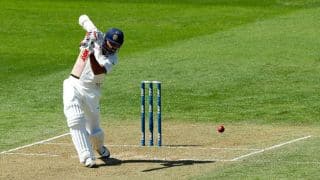