Narendra Modi: Cricket is a shared passion of Australia and India

Narendra Modi: Cricket is a shared passion of Australia and India

A breakfast meeting was hosted for Narendra Modi in Brisbane.

A day ahead of his visit to the historic Melbourne Cricket Ground, Prime Minister Narendra Modi today got a flavour of cricket. The occasion was a breakfast meeting hosted for Modi by Queensland Prime Minister Campbell Newman where the former Aussie pace bowler Michael Kasprowicz was present.

Kasprowicz, who was the master of ceremonies, brought the house down when he said how Indians used to relish batting legend Sachin Tendulkar smashing him for fours and sixes. It was as if India’s Gross National Happiness is Tendulkar, he said.

Kasprowicz, who hails from Queensland, also shook hands with Modi. After his Summit talks with Australian counterpart Tony Abbott and addressing the Australian Parliament in Canberra tomorrow, Modi heads to Melbourne tomorrow evening where he will pay a visit to the iconic Melbourne Cricket Ground (MCG).

The MCG can accommodate over a lakh people. “Cricket is a shared passion of Australia and India. I thank PM@Tony AbbottMHR for hosting me at the iconic Melbourne Cricket Ground,” said Modi on Twitter, ahead of his visit.

It is rare for foreign leaders to be hosted at the stadium where Michael Jackson, Rolling Stones and Madonna have performed and where pope John Paul III held a mass in 1986. Kasprowicz, 42, was known for his swing and relentless and hard-working approach, and was particularly known for his contributions in 2004 to Australia’s success in the Indian subcontinent. 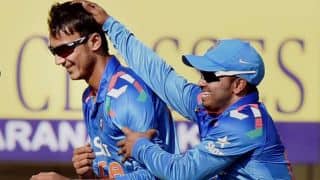