Pakistan opener Nasir Jamshed struck a fine century that guided his team to a comfortable victory chasing India’s 227 for six in the first One-Day International (ODI) at Chennai. 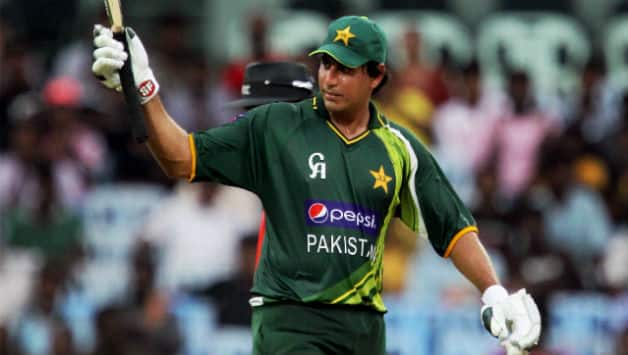 Pakistan opener Nasir Jamshed struck a fine century that guided his team to a comfortable victory chasing India’s 227 for six in the first One-Day International (ODI) at Chennai. Pakistan got to their target with 11 balls to spare.

Jamshed survived a nervous first hour for the Pakistanis where they lost two wickets to India’s Bhuvneshwar Kumar. From 21 for two in the 11th over, Jamshed (101 not out) and Younis Khan (58) shared a 112-run partnership to settle things down.

Younis, who has perennially thwarted the Indian attack all through his career was there again as a thorn in the hosts’ side as he scored a brisk half-century in the middle overs.

Jamshed, meanwhile, was as calm and composed as can be, quietly going about his innings and accumulating the runs. Only 26 of his 101 runs came from boundaries as he mechanically took the ones and twos and defied the Indian bowlers.

Jamshed lost Younis and captain Misbah-ul-Haq (16) in quick succession with almost 100 runs more to win, but did not flinch as he took Pakistan home with the ever-reliable Shoaib Malik (34) at his side.

Doing so, Pakistan took a vital 1-0 lead in the three-match ODI series.

Earlier, India captain Mahendra Singh Dhoni (113 not out) gave his teammates a lesson in watchful batting on a damp, green pitch as he rescued India from 29 for five to clock 227 for six on the board in 50 overs.

Dhoni’s eighth One-Day International (ODI) century included his 7000th run in the format as he went about digging India out of the deep ditch carved by Pakistani quicks Junaid Khan (four for 43) and Mohammad Irfan (one for 58). The Indian skipper’s effort was phenomenal, when at one stage it did seem like the entire team would be bundled out under three figures.

Junaid and Irfan made faultless use of the conditions after Pakistan put India in to bat. The top four Indian batsmen were out bowled within the first six overs, while Rohit Sharma (4) edged to the slips in the tenth over where Mohammad Hafeez took a fantastic diving catch.

At 29 for five, the crowd had gone silent and there were plenty of morose faces spotted on camera. A low-scoring game was on the cards given the conditions, but not even the most pessimistic among the spectators would have expected India to be bowled out under 100, which was where the match was going.

Out walked Dhoni at number seven, with a different plan in mind. Along with Suresh Raina (43) Dhoni set about on his task to steady the Indian ship against the menacing swing and movement off the Pakistani quicks.

Dhoni and Raina played astutely in difficult conditions and took India past the 100-run mark, before Raina was deceived by Mohammad Hafeez’s off-spin. With the score on 102 for six and 17 overs to go, Dhoni knew that the job wasn’t done. He needed to forge another partnership lower down the order, and what better man than Ravichandran Ashwin (31 not out) to do that with.

The off-spinner, who has impressed recently with his bat more than he has with his primary trade, dug in along with his captain and put on 113 runs for the seventh wicket as India got past the 200-run mark – something that would have seemed impossible in the first hour of the match.