Commentating on air, Hussain picked up on visuals of Anderson and Broad changing the field during day two at Southampton while Root was seen gesturing to them to stop.

Former England captain Nasser Hussain has pinpointed a moment during the second day s play of the fourth Test between India and England at Southampton as evidence, in his opinion, that Joe Root was not in control of what his two senior most fast bowlers were doing.

Commentating on air Friday, Hussain picked up on visuals of James Anderson and Stuart Broad changing the field during day two at The Ageas Bowl while Root was seen gesturing to them to stop as they told the fielder at third man to move finer.

When he s (Root) not at mid-off, Anderson and Broad absolutely rule the roost. They set the field, they do everything. They don t want any input from the captain who s at second slip, said Hussain while on air after Root was seen standing at second slip shaking his head while Broad changed the field.

That s the first time I ve seen Joe Root get cross on a cricket field with his senior bowlers. I d actually like to see more of that from Joe Root.

Root was then seen going over to Broad, and Anderson walked across from mid-on to join the discussion. Hussain questioned Root s control over the England team, saying: Jimmy Anderson wants to come in, he wants to be involved in the discussion. Joe Root s saying look, I ll come, I m in charge, I set the field. You just bowl. I think that s why Root at times likes to go to mid-off because he wants to constantly be in Broad and Anderson s ear. 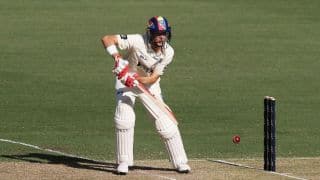