KXIP failed to get going against an inspired DD attack.

Delhi Daredevils (DD) put in a dominant bowling performance against the Kings XI Punjab (KXIP) at the Feroz Shah Kotla. KXIP’s wretched run continued as they struggled after being put in to bat, putting up a paltry 118 for eight. Zaheer Khan made his comeback for DD and made an instant impression by dismissing Virender Sehwag off the second ball of the game. It all went downhill for KXIP from there and it required a strong seventh wicket stand between David Miller and Akshar Patel to help KXIP move to their eventual score. Nathan Coulter-Nile’s four wicket haul also played a big role in DD’s dominance.

Donning the lavender in support of Yuvraj Singh’s cancer awareness initiative, DD looked a nit on the prowl. The hungry Zaheer made a mark early on with some tight lines. JP Duminy also got into the scheme of things by getting Shaun Marsh early. There was some poor strokeplay from the KXIP batsmen that saw the end of Manan Vohra and Wriddhiman Saha. Having lost their first four wickets inside the six over, KXIP were behind the eight ball.

George Bailey scripted a stable knock but did not last long. The ploy to bring back Thisara Perera also did not work as he holed out to the deep. Miller had to curb his natural instincts and play with a very measured approach. KXIP were not getting the runs quickly. An example that illustrates the point is the fact that they got their first six only came in the 14th over.

Miller and Akshar managed a good stand between them, taking the attack from the 15th over. That brought some respectability to the KXIP score as they moved towards a ton. Miller had started slowly but went on to pick up pace towards the slog overs. They managed to stretch their partnership to 57 before Akshar was dismissed in the 18th over. Miller fell soon after for 42 as Coulter-Nile picked up his fourth wicket. In the midst of Zaheer’s comeback, Coulter-Nile went almost unnoticed, but he too played a huge role. KXIP lost hopes of touching 130 then. Anureet Singh’s six off the last ball helped KXIP get close to 120 though. 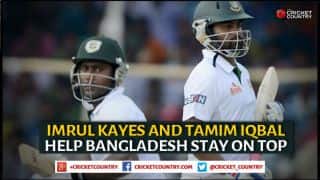