Eager to make an impression on home turf and cement his place as Australia's front-line spinner, offie Nathan Lyon today said he would look to get the prized scalp of the iconic Sachin Tendulkar in the fourth and final cricket Test starting on Tuesday. 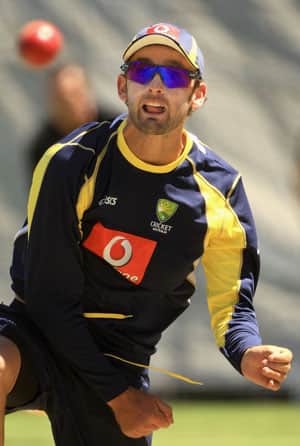 Eager to make an impression on home turf and cement his place as Australia’s front-line spinner, offie Nathan Lyon today said he would look to get the prized scalp of the iconic Sachin Tendulkar in the fourth and final cricket Test starting on Tuesday.

“It’s a great chance as a young spinner to play against the best players of spin bowling. Their (use of) hands are unbelievable and they are really confident against spin…It’s a dream to bowl to Tendulkar and it’s a great opportunity. I look to get him out,” said Lyon.

Lyon belongs to Canberra but he shifted to Adelaide in due course and has been one of the ground-staff members working at the Adelaide Oval till 14 months ago.

Unlike two previous Tests, he is determined to leave a mark in Adelaide and has taken the help of two veterans he admires the most, spin wizard Shane Warne and batting great Ricky Ponting.

“I had a brief chat with him (Warne). He’s a fantastic legend of sport and the best spin bowler ever of the world. His word of advice was to enjoy every moment of it. Then I have been bowling to Ricky Ponting in the nets. He is one of the best players to bowl to for a spinner.”

Lyon had pretty ordinary first couple of Tests in the series in which he picked up a mere two wickets for 180 runs. He puts it down to lack of long spells since fast bowlers were getting the job done for the Australian team.

“I couldn’t do much bowling (in the first two Tests) but I’m confident of my skills. I haven’t changed a thing. The quick bowlers have been fantastic and they are getting the job done.”

Another off-spinner, Saeed Ajmal of Pakistan, has made waves with a 10-wicket haul against world’s number one Test team, England in Abu Dhabi and his ‘doosra’ has had a mesmerising effect on English batsmen.

Lyon though says ‘doosra’ isn’t quite his cup of tea.

“I just love bowling my stock ball and doing the change in pace and rely on natural variation. There’s no doosra for me. I rely on my ability to hang the ball in the air, and get some drop and drift on it. I’m not worried about the doosra,” he said.

Quick bowlers are making a meal out of Indian batting, but Lyon doesn’t think his role in the side has changed from being an attacking bowler to being a defensive one.

“I still try to attack while bowling spin. I haven’t bowled long spells, not really get into in the sense. We had a couple of short Tests.”

Adelaide though could be different with its reputation of helping the spinners as the match progresses.

“The pitch here gets slower and lower and there’s a little bit of turn for me. To me, it’s the best ground in the world and I look forward to playing here. I definitely feel comfortable here but it’s still a game of cricket and I have to compete hard and execute my skills.”

Indian batting has been under the weather in this series but Lyon suspects the visitors would carry the attack to their camp in the final Test.

“I expect India to hit us hard. It could go to the fifth day and it would be a pretty hard task for us,” he said.

Lyon hasn’t quite spoken to his mates of the ground-staff and sought support by way of spin-aiding turf. He also hasn’t offered any inputs to his team regarding how the strip behaves in Adelaide.

“Michael Clarke (captain) and Arthur (coach) have played more cricket than me and have more understanding. They are more than capable of taking the right decisions.”

Lyon used the early finish of the third Test at WACA last week to work on his bowling, batting and fielding, and hopes it would come to good use in the final game.

“It’s been a great journey and I’ve loved every moment of it. It’s been lovely to have worked here but it’s in the past. My focus now is on playing Test match cricket for Australia.”

There’s a fair bit of grass on the pitch and Lyon is assailed by the stray thought that Australia might even contemplate going with four quicks in the final Test.

“There’s a still fair amount of grass still and team hasn’t been decided yet. Who knows we might still go with four quicks.”

Lyon is hoping the left-arm paceman Zaheer Khan’s footmark would later develop into good areas for him to exploit while bowling to a right-hander.

“Hopefully Zaheer Khan would have those roughs. Still you have to try and plan to get these blokes out. That’s for me to now try and execute those plans.”

Brendon McCullum yet to be paid by Kochi Tuskers Kerala