Spinner Nathan Lyon has received the backing of the Australian team ahead of his showdown with India's big-name batsmen in the second Test at the Sydney Cricket Ground starting Tuesday. 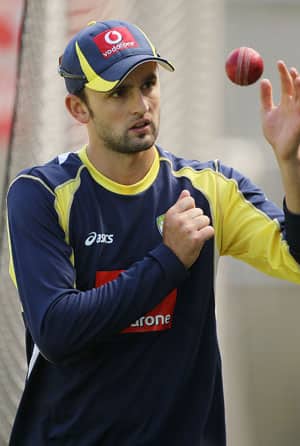 Spinner Nathan Lyon has received the backing of the Australian team ahead of his showdown with India’s big-name batsmen in the second Test at the Sydney Cricket Ground starting Tuesday.

Lyon, 24, faces a daunting task against India’s spin-savvy batsmen, headed by Sachin Tendulkar, searching for his 100th international century after being dismissed for 73 in the first innings of last week’s Melbourne Test.

Lyon was preferred to fit-again paceman Ryan Harris on Monday in an unchanged Australian team for the Sydney Test and is expected to get more overs than the 22.5 he bowled in Australia’s 122-run win in Melbourne.

Skipper Michael Clarke has put his trust in the South Australian off-spinner to cope with the anticipated Indian assault.

“This series is a tough challenge for Lyon because India are such good players of spin bowling,” Clarke said Monday.

“I thought he did a pretty good job without getting as many wickets as he would have liked in the last Test in Melbourne. So I’m confident that Lyon can certainly take a few wickets in this match and continue to do a good job for us.”

“There’s absolutely no doubt that they will try and go after him,” Arthur said at the weekend.

“Nathan is a pretty skilful off-spinner so I reckon that will develop into the very interesting contest. We’re going to get a lot of overs out of Nathan if it’s a typical SCG wicket and I’ve got full confidence in his ability to tie India down and, in the second innings, strike for us. I think it could be (a pivotal contest) providing we get enough runs on the board. If we have runs on the board Nathan becomes a very interesting prospect for us.”

Significantly, Lyon, gearing up for his ninth Test, has yet to play a first-class match at the usually spin-conducive Sydney Cricket Ground.

That will be welcome news for Lyon, who was largely a peripheral figure in Melbourne but could come more into his own in Sydney where he confronts the biggest challenge of his fledgling Test career.

Tendulkar, Rahul Dravid, Virender Sehwag and V.V.S. Laxman are renowned experts of playing spin and will be keen to belt Lyon out of the attack and place added pressure on the home pace trio of James Pattinson, Peter Siddle and Ben Hilfenhaus.

“You’re always in the game if they’re looking to play positive and take you down. All that talk isn’t fazing me at all,” Lyon said of the Indian batsmen.

“I am just really confident in my skill-set and looked forward to bowling to them. Brad Haddin and Mike Hussey came up and said to just enjoy the moment and the challenge and to back myself, which was really good.”

Lyon has 23 Test wickets including a five-wicket haul on his Test debut against Sri Lanka in Galle last August. (AFP)