The play between New South Wales Sheffield Shield against Queensland was stopped as the Fire alarm went off because of Nathan Lyon.

New South Wales were playing Queensland in a Sheffield Shield match at Allan Border Field, Brisbane. On November 15, Day Three of the match, New South Wales needed just 18 runs to win when the fire alarm near dressing room in the Stuart Law Grandstand went off.

Early tea was taken and no player was allowed to use the dressing-room. After some confusion, Nathan Lyon owned up: [The toast] popped up first and I wasn t happy so I put it back down and I got carried away watching the cricket, according to cricket.com.au. There have been instances of gravy and fried calamari stopping cricket matches, but toasts probably made its first appearance on the list.

There s a first for everything, Lyon added. I was getting a bit bored in the change-rooms. Two trucks rushed into the ground as the alarm went off. Steve Smith already said he s going to cover it (the fire truck call-out fee), Lyon mocked.

When the match resumed after the 30-minute break, Kurtis Patterson and Daniel Hughes did the job for New South Wales recording a six-wicket victory. 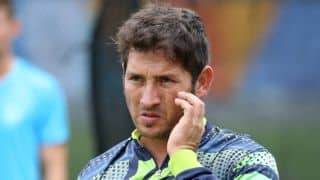