The Indian team crushed arch-rivals Pakistan by 203 runs in the semi-final clash of the prestigious tournament in Christchurch.

The minister extended his best wishes to the Indian team for the final against Australia to be played on Saturday.

He credited the exceptional coaching skills of chief coach Rahul Dravid for the achievement.

Sidhu said Dravid played a yeoman’s role in shaping up and honing the skills of the Indian team, that delivered par excellence performance in batting, bowling as well as fielding.

Calling Shubhman Gill, who hit a classy unbeaten 102 off 94 balls, the future of Indian cricket, Sidhu said the 18- year-old played a gem of an innings which paved the way for victory.

The Indian team has so far been enjoying an unbeaten run in the U-19 World Cup.

Earlier, in the quarterfinals the Indian team beat Bangladesh where as in the league phase, the Indian team topped the group by defeating Australia, Zimbabwe and Papua New Guinea. 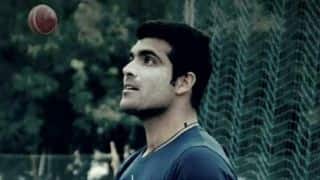 Manzoor Dar: From a daily wage labourer to an IPL contract