Australia are likely to host Afghanistan in November of 2020 as part of their preparation towards four-day Tests.

The concept of four-day Test matches is still work in progress, but if Cricket Australia CEO Kevin Roberts is to be believed, it is important to keep an open mind towards it. Cricket boards around the globe are beginning to warm up to four-day Tests, including CA, who is not taking a step back either. Australia are likely to host Afghanistan in November of 2020 as part of their preparation towards four-day Tests.

However, with two editions of the ICC World Test Championships being held in 2019-21 and 2021-23, Roberts, who replaced James Sutherland in October, is strongly in favour of four-day Tests, provided they are conducted outside of these two ICC events.

“Outside the Test Championship that’s the opportunity,” Roberts told SEN Radio. “The Test Championship is five-day Test cricket out to 2021, so that doesn’t change, but outside of that there are other possibilities to consider and beyond that, beyond 2021 what it might look like. There’s a bit to be said for it isn’t there, and it’s certainly something I think we need to be open-minded to down the track.

“The average duration of a Test match is just a shade over four days and certainly without jumping to conclusions that that is the right solution, it is one possibility we’ve got to be open to. There’s been timeless Tests over the years, we know there were even three-day Tests, so Test cricket has not been five days in duration forever, and I think the concept of four days going forward is something we need to be open to without jumping to conclusions.”

Interestingly, it was during Sunday last week the fourth day of the first India-Australia Test in Adelaide which witnessed a spike in television ratings under the new broadcast deal with Fox and Seven. They gained a combined audience of 1.261 million during the third session, the most for the match.

“The facts are we had about 3,000-4,000 spare seats in the shade that were available for people who required them. In the event that those were used and we needed more we had plans to immediately open level five as well,” Roberts said. “We judged that based on need and there were enough seats in the shade based on need and in the event we ran out of those, then level five was being opened up, so there was a lot of talk about it. But in terms of the facts of that one, there were more seats available in the shade.

“I wouldn’t suggest that was an economic decision, it was a practical decision yesterday in terms of the most practical way to operate the stadium. In the event there was need then there was absolutely no opposition from a CA perspective to opening up level 5. There’s always a balance and we’re conscious that things will never be perfect for absolutely every individual at a stadium, but certainly we seek to optimise them as much as we can.” 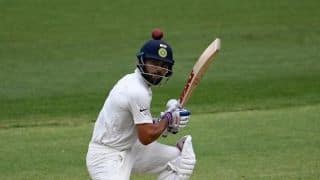