The Nepal team will play the World T20 qualifiers in Ireland and Scotland.

Mumbai: Mumbai’s renowned physiotherapist Aijaz Ashai, who has been appointed head physio and fitness trainer of the Nepal cricket team, on Thursday said that country wants to win the upcoming World T20 qualifiers and make it to the main tournament which can bring back smiles in the quake-ravaged Himalayan nation.

The Nepal team will play the World T20 qualifiers in Ireland and Scotland from July 9 to 26 in its bid to book a place in the main tournament to be held in India in 2016. New Zealand women expect close series against India women

“I have joined the Nepal cricket team as head physio and fitness trainer. I will be travelling with the team for the World Cup qualifiers,” Ashai said at a press conference here ahead of flying to Ireland.

“I met the team and talked to every player individually and made them understand what has happened should be left in the past. The best thing that can happen is to play well, win and qualify for the World T20. That will be the biggest thing.” Caribbean Premier League signs Rs. 100 crore multi-year deal with Kyazoonga

“Skipper Paras Khadka said to me ‘The only way we can bring back happiness in the faces of the Nepalese people is to win the World T20 qualifiers and make it to the main tournament’.

“People in Nepal love cricket and that will be the best gift for them,” he said. The devastating earthquake in April claimed more than 8,000 lives. Jagmohan Dalmiya meets ACU cheif Neeraj Kumar

The Mumbai-based doctor was earlier associated with the Mumbai and Delhi Ranji teams, and also with the Mumbai Indians (MI) in the Indian Premier League (IPL) as head physio.

About his association with cricket in Nepal, Ashai said that initially a couple of Nepalese players had visited him for advice and treatment regarding injuries and fitness-related issues. Their positive results made the Nepal Cricket Association (NCA) appoint him. Sachin Tendulkar roped into the Cricket Committee of the MCA

“Over the last few years, some of the cricketers from Nepal had come to me for treatment and they went back and informed others. So that is how the word spread around. Finally the NCA approached me to take up the job some months ago but I only accepted their request last month,” he said.

Nepal’s World T20 probables underwent training in Dharamsala from June 5 after Board of Control for Cricket in India (BCCI) secretary Anurag Thakur extended support to the neighbouring country after the quake. BCCI refutes media reports against Jagmohan Dalmiya

“Last month, I conducted a fitness-cum-conditioning camp for the Nepal team in Dharamsala. The venue was arranged by the BCCI. The players, who are all youngsters, showed a lot of dedication and eagerness to stay physically and mentally fit,” Ashai said.

The physio said he was impressed with the Nepal cricketers on their fitness levels and zeal to perform. Venkatesh Prasad, Sunil Joshi to play in KPL 2015

“The average age of the team is 25 years and the fitness level of the players is far, far better than many prominent teams. They only technically need to improve their game. If they can do that they can go far,” said the physiotherapy expert who has also been associated with the Indian rugby team for the last couple of years. 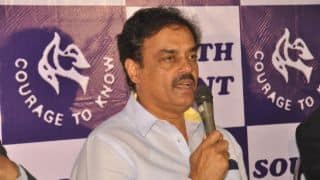